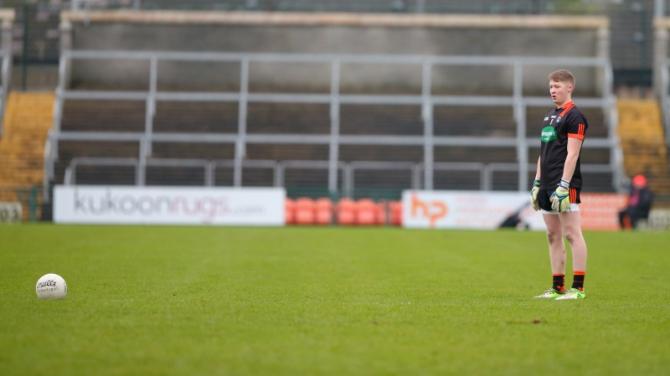 HE was thrown into the deep end last season when he answered Kieran McGeeney’s call but despite a shaky start, Blaine Hughes has been Armagh’s Number One for over a season, writes Steve Malone.

The Carrickcruppen man made his debut in Pearse Stadium in Longford in last season’s National League victory, where he conceded three goals after some calamitous defending.

Making a rare media appearance, the almost shy goalkeeper admitted he thought he had blown his chances to play for Armagh but he is glad McGeeney has kept faith in him.

Hughes has managed to stave off the challenge from talented Harps goalkeeper Patrick Morrison for the first team gloves.

“Last year there were nerves when I started against Longford and I didn't feel I had a right to be in this position, but Kieran had faith in me, to put me in that position and I had some consistency over a number of games and I have taken it from there really,” said Hughes

“I felt more confident as the games have gone on. I had a stinker against Longford and I thought that was my Armagh career over. But after that I put my head down and kept working hard and I have stayed consistent.”

Hughes plays outfield for his club Carrickcruppen and they are blessed with the goalkeeping talent of Stephen Havern and John McCullough (John also plays outfield), but it was with St Paul’s High School, Bessbrook, in 2013 that Hughes first picked up the gloves.

He was in the squad along with current members Jemar Hall and Ryan Owens (U20) that won the Ulster and All-Ireland title and subsequently played in goal for the Orchard Minor and U21 teams.

At only 23-years-old, he could have a long career between the sticks. He works with Morgan Fuels, but has ambitions to work in the strength and conditioning industry and is currently studying in Sentanta College in Thurles and online.

A joiner by trade, he swapped the long hours in the back of a van to working office hours, to stay fresh for training and games.

“I am working with Morgan Fuels and studying with Setanta College in Tipperary, I travel down once or twice a month for classes, but it would be mostly online and try and manage it between training and work as well,” Hughes said.

“I was a joiner before so it is better than travelling down to Dublin at 6.30am and coming back up the road tired.”

Having got their season back on track with the win over Westmeath, the defeat to Fermanagh still casts a cloud over the squad but Hughes feels that his team have become more resilient following the loss in Brewster Park.

“I try my best not to look at it, I just move on and think about the next game and that's what a lot of the players mentality was - just don't let it get into your head that way,” Hughes said.

“We stay tight as a group and don't let things people say in the paper get into your head and when you see someone in the street I just wave at them and walk on,” Hughes chuckled.

“We have a point to prove so we just got to keep pushing on. It is the same as last year, when we got beat by Down. We just kept our heads down and kept pushing on and reached the All-Ireland quarter-finals.

“I have only been here two years but you can clearly feel all the boys are working hard together and we have all gelled well as group. Especially after we lost to Fermanagh, a lot of people thought we might have folded but being so close-knit, it has made us stronger.”

While a return to the quarter-finals and a place in the Super 8 is the target, Hughes feels his side need to pull a performance out of the bag when they face Sligo in Markievicz Park on Saturday (June 23) at 6pm.

“We are probably on the same level as Sligo in terms of consistency but hopefully come Saturday that will be a different story,” Hughes said.

“We have played them a few times in the League and it will be a tough game. It is tough to go down there but hopefully we get the result.