Down excel but they exit after   seeing red and black 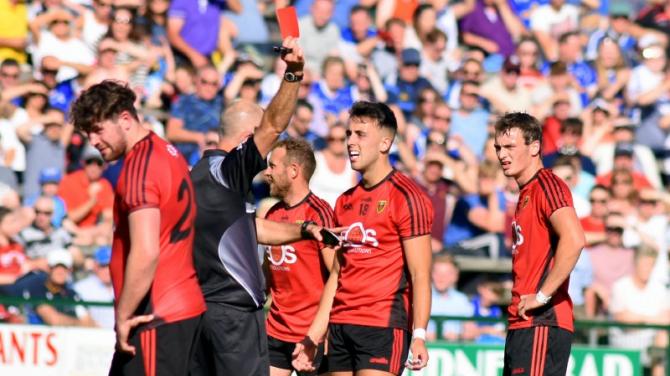 DOWN gave their best performance of the season against Cavan at a boiling hot Brewster Park, Enniskillen on Saturday evening - but it still wasn’t enough to stop the Mourne men crashing out of the All-Ireland Senior Championship.

Lady Luck most certainly wasn’t on the side of Down but the referee Cormac Reilly of Meath, with some bizarre decisions, didn’t help matters as he black-carded two Down men in the first half and then with over 20 minutes left to play dished out a red to Ryan Johnston.

A bad goal-keeping error from Shane Harrison also played a big part in Down’s defeat while the excellent Darren O’Hagan was so unlucky deep into injury time as he surged down the left flank, sizzled past a Cavan defender and fired in a bullet drive. Unfortunately for Darren and Down, the opposing net-minder James Farrelly made a super point-bank save to deny the Clonduff man. Many people were of the opinion that O’Hagan should have fisted the ball over the bar to level and thus have taken the match into extra time. But had he scored, it would have been the correct option and he would have been a county hero.

The Mourne men also suffered further set-backs. Even before the throw-in Down lost two of their top players, Donal O’Hare and Shay Millar through injury while Caolan Mooney limped off with a groin strain and Niall Donnelly damaged his shoulder and he too didn’t finish the match.

And although the summer (and the year) is over for him and his team, Down boss Eamonn Burns, despite acute disappointment, was satisfied with his team’s display, saying: “Everything we asked of them we got – and in fact we got more than we asked for. I’m immensely proud of the performance here today.”

When a journalist put it to the Mourne manager that the best team lost, he answered: “People will sit down and bisect it and take it apart but I thought we put in a super performance.”

On the black cards, Burns said: “I didn’t actually see either of them. I was quite surprised as I didn’t see any incident at all.

“On the red card against Ryan Johnston, I don’t believe there was an awful lot in it.

“It was telling at that point of the game as I think we were four points up at that stage. Then they had the extra man and a slight breeze advantage. And I knew they would use it. However, I thought we manned up and went at them. We didn’t lie down under it and we kept going right to the end.

“We kept the ball at one time for three or four minutes and I think we then got a free that just went the wrong side of the posts. If that had of gone over… well you never know.

“And we had a chance at the end where Darren went for a goal when he could possibly have fisted it over the bar. But these things happen in milli-seconds and I can’t fault him for that.”

“When you reflect back on it we lost a lot of key men. We lost key men going into the game. And we lost key men before half-time.

“But I have to say that when we started to run the bench we couldn’t have asked any more from the young lads that went on.

“I thought they stepped up manfully and went about their tasks very well. They carried the fight to Cavan at all times and they didn’t shirk at all. Any questions they were asked, they answered,” said boss Burns

Yet in truth in the first 12 minutes Cavan were the better side and raced into a six points to two advantage. Seanie Johnston (three frees), Ciaran Brady, Dara McVeety and Gearoid McKiernan pointed for Cavan while at the other end Conor Maginn curled over a delightful 35-yarder and corner back Anthony Doherty hit one of his specialist cut-across-the-ball free-kicks.

On 13 minutes Connaire Harrison began Down’s revival with a classy score from the left flank with Ronan Millar a couple of minutes later reducing the deficit further with an accurate free-kick.

Cavan edged three points in front again on 16 minutes with a Conor Bradley effort but thereafter Down took control. And they fired over three points in the next 10 minutes to level matters at seven points apiece. These scores came from Kevin McKernan with a stunning, swerving 40-yard effort, Anthony Doherty with a slick free-kick while Ronan Millar squared things with a close-range free.

Down were playing great stuff and things were looking good. But the Mourne County received two body blows on 27 minutes when referee Reilly flashed a black card at Connaire Harrison and then seconds later at Kevin McKernan. Few saw why Harrison was carded (pulled a players leg) but looked as though McKernan received his black for consistently questioning the referee and lineman’s authority.

Two of their top players were gone but the red-and blacks refused to lie down. And indeed going in at the break Down had raced into a two-point advantage, Peter Turley hitting a fine long-range score, substitute Niall Madine pointing with another mighty point while Sean Dornan grabbed a magical effort from way out on the left flank.

Cavan’s only reply came from Sean McCormack on 34 minutes.

Eamonn Burns evidently had lots to say to his players at the break as Cavan went out and were ready to start at least five minutes before Down reappeared.

Still Cavan reduced the gap to a single score when Dara McVeety pointed on 38 minutes.

However, Down were forcing the pace. True they fired wide of the Cavan posts three times in as many minutes but they were looking dangerous. And when another substitute, David McKibben hit a cracking score on 41 minutes, it was just the boost Down needed. Millar added to the Down tally with a free-kick on 45 minutes with, two minutes later, Sean Dornan finishing off a powerful Niall Donnelly run with another excellent point.

It was looking like Down’s day but once more the official threw a spanner into the Mourne works when on 48 minutes, he flashed a red card at Ryan Johnston. Again most people in the ground didn’t see why he had sent off the Kilcoo speedster.

And things went further downhill on 53 minutes when McKiernan shot for a point but the ball dipped. It seemed an easy catch for Shane Harrison but the keeper somehow misjudged the flight of the ball and it slipped through his outstretched hands and into the roof of the net.

Again the Gods were ganging up against Down.

Once more though the Mourne iron will emerged. And although they were playing with 14 men, Down ran Cavan ragged with their accurate passing. Indeed approaching the hour mark they held the ball for at least three minutes, interchanging perhaps 60 to 70 times.

Still Cavan weathered the storm and levelled the game on 60 minutes via Enda Flanagan and they went in front on 61 through Conor Brady.

Ronan Millar however, pointed from a free to level on 62 minutes.

But with time slipping away Cavan put two points between the sides when Oisin Kiernan and Padraig Faulkner scored.

Time was up but the official signalled for an extra five minutes. With two of these gone Doherty pulled Down back into contention with a free-kick.

Then with a further two minutes played came that blistering Darren O’Hagan run and wicked drive. But Farrelly saved his side with a brave stop and straight from his clearance Gearoid McKieran ran clear before sending over the insurance score.

After the final whistle a free-for-all broke out that lasted several minutes. Though it did appear that the big Cavan midfielder McKiernan started it when he began goading Darren O’Hagan and then another Cavan player ploughed into the back of the Clonduff man. After things settled down referee Reilly dished out red cards to Cavan duo Dara McVeety and Conor Moynagh plus Down’s Anthony Doherty.

Down are out. But what is the future for the men in red and black? And will manager Eamonn Burns stay on?