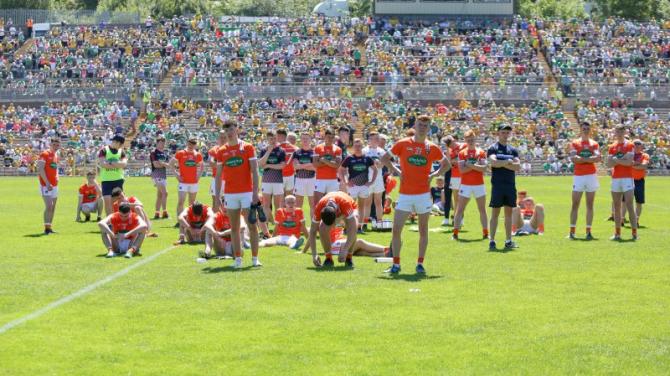 ARMAGH manager Peter McDonnell said that the future of Armagh football is in a good place following Sunday's U20 Ulster Final defeat to Derry.

The Mullaghbawn man wasn’t looking for any excuses about Sunday’s loss, even though the build-up was hardly ideal.

While eight of the ten suspensions given were lifted, Armagh were still without Ryan Owens and Eoghan McDonnell, two natural leaders with senior team experience and that was a huge blow but the Orchard side didn’t display any obvious signs of disruptive preparations and proved they could stand toe-to-toe with pre-match favourites Derry, which McDonnell was proud of.

“They are a great bunch of lads, there were several future senior Armagh footballers on show there today and they will go from strength to strength, as a lot of those lads are underage next year and this year’s experience will serve them well,” said McDonnell.

Given the suspensions from the Ulster U20 semi-final victory over Tyrone and the subsequent lifting of eight of the ten suspensions, the U20 boss gave thanks to the Armagh Co Board and committee and praised the attitude of the Armagh supporters.

“This is a classic piece of people doing exactly what they said they were going to do, so from that end Armagh and their footballers are well served by the committee we have,” McDonnell said.

“I would like to say that the support that we got from the Armagh public over this past number of weeks has been tremendous. I think we gave them something to be proud of at a time when they need an injection of self-belief and hope.”

Indeed the Orchard lads put in an excellent performance, but on Sunday Derry finished the game in style with Slaughtneil’s dual star Brian Cassidy changing the game completely with his tally of 2-02.

His first goal came on 46 minutes, which McDonnell described as the “killer blow”. Up to that point the Orchard side were well in the shake-up.

It took only 48 seconds for Armagh to get off the mark, first they had to defend Derry’s initial attack and then swiftly moved the ball into attack where Cullyhanna’s Ross McQuillan chipped between the posts.

It was a tense and entertaining opening half with both teams going for the jugular and both displaying inspirational defending.

Crossmaglen's Rian O’Neill followed this up with a converted free to help ease any nerves but as expected the Oak Leaf young guns hit back with two points, including a free from Lorcan McWilliams.

Armagh gave Granemore's Marty Carr his Championship debut and the big man positioned at the edge of the square.

O’Neill’s converted 45’ was met by a fine point from Man of the Match Declan Cassidy (0-5) but Armagh still displayed a cutting edge with Conor O’Neill’s 40-metre mazy run and point.

The absence of midfielder Eoghan McDonnell was a massive blow for Armagh and it was telling when they lost the next three kick-outs in a row and Derry punished with Lorcan McWilliams, Declan Cassidy (from 50-metres) and the green-booted Ben McCarron all scoring.

Cullyhanna's Jason Duffy struck a welcome long-range point to close the gap but then came the goal chances.

A bit of a row broke out following Derry's big Brown being fouled but it quickly was quelled before Derry pulled away again with points from Declan Cassidy and McCarron.

Though it was McQuillan who had the last say of the half with his sheer persistence resulting in a fine point and he turned an remonstrated with his team-mates to give encouragement.

Armagh introduced Culloville’s Ryan Garvey for big Carr and Cullyhanna’s Jason Duffy displayed blistering pace to burst through the Derry defence and drill over the bar. Then Conor O’Neill cut the gap to a point with his free from his hands but Armagh just couldn’t get back on terms. Each time they probed the Derry’s defence the Oak Leafers were quick to counter.

Derry’s big Callum Brown is a man-mountain and a fantastic athlete and while Armagh’s Barry McCambridge did a brilliant man-marking job at the edge of the square, the best I’ve seen all year, Brown still possessed a huge presence and danger.

Declan Cassidy’s fourth point kept Derry ahead but after a period of both defences coming out on top, with Corrinshego's Declan Loye putting in excellent tackles, Rian O’Neill and Lorcan McWilliams traded points and there was still only two points between the sides going into the last quarter.

But a minute later the game changed as Brown made space for Oisin McWilliam’s to nip along the touch line and as he looked like targeting the near post he cleverly passed to the edge of the square where substitute Brian Cassidy coolly slotted into the net.

Armagh needed a response but it couldn’t come quickly enough, instead Derry with their tails up pressed home with that man Cassidy firing over a rapid two points.

Even with the introduction of Culloville’s Ryan Garvey, Darren Luckie and Kevin McAlinden of Sarsfields, Armagh failed to make much in-roads. O’Neill was moved to the edge of the square but Derry’s hard working defence cut out passes or surrounded the Crossmaglen talisman and Armagh got limited joy.

Then any hopes of a comeback were dashed when Brian Cassidy drilled home his second goal.

With five minutes additional time announced the Orchard lads tried get back into the game and McQuillan and substitute Justin Kierans tapped over points, but it was Derry’s day and Armagh manager Peter McDonnell had no complaints about the result.

“It was what it was, we tried to make the most of it, we didn’t know who we were going to have or who we weren’t going to have, but at the end of the day we were beaten by a stronger Derry team and that is reality of it,” said McDonnell.

While it was a disappointing result it was a performance the lads can be proud of. It was a strong team performance led by Belleek's hard working Callum O'Neill and players such as McQuillan and McCambridge look ready made for the senior step up.

It is clear McDonnell had the players singing from the same hymn sheet and with half the panel still U20 next season, he can help bring them progress but he isn't sure if he will still be manager next season.

“I have no complaints, I couldn’t have been with a better bunch of lads. Martin [McQuillan], Gary in the background and Lennie [Ciaran Lenoard] are fantastic and I couldn’t speak highly enough of them,” McDonnell said.

“My job is a very volatile sort of job, you could be there one day and you could be gone the next and that is the nature of management. And I wouldn’t be presumptuous enough to say that I’ll be here next year.”

I imagine the position is McDonnell's to turn down.