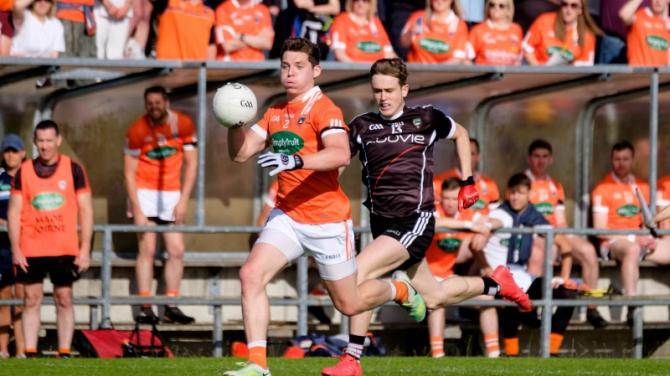 ARMAGH manager Kieran McGeeney has urged his players to look within themselves to see if they possess the drive and ambition to stay in the All-Ireland Championship series.

Armagh will face Clare in the Athletic Grounds on Saturday (June 30) at 7pm following the Orchard County’s six-point win over Sligo on Saturday evening in a game McGeeney was happy with but feels there is room for improvement.

“We are extremely happy and it is quite difficult to say that, when you see some of the stuff that has been thrown at them,” said McGeeney.

“We have had a lot of players come in this year that have really stood up for us and we are delighted with that.

“Yes, we had a bad day against Fermanagh and one bad game out of 15 games this year, including the McKenna Cup for some of these lads, isn’t all about one bad day out.

“But they are going to need all of those qualities to look inside them for the next game because we are going to have to step it up and I think that is where these fellas want to be.

“They want to get tested and hopefully we will be able to give a good account of ourselves.”

Played in Markievicz Park, Armagh arguably finished the game with a stronger team than they started with, notwithstanding the black cards to Aidan Forker and Greg McCabe.

It was a solid collective team performance, in an entertaining contest played in front of 3,617 fans, with three thousand of those supporting the Orchard men.

Stephen Sheridan got his first taste of Championship action after coming back from a hamstring injury, which kept him out of action for three months. His impact can be measured by the fact he made Armagh’s first ‘mark’ on 47 minutes, which set up an attack and the he also scored but the Forkhill midfielder also gave Armagh assurance around midfield.

All round it was a good disciplined (more often than not) performance. Mark Shields did an excellent marking job on Sligo’s talisman Adrian Marren and kept him scoreless from play, while Rory Grugan, Ryan McShane and Andrew Murnin kept Armagh on the front foot.

Ethan Rafferty’s absence is a big blow, as it narrows Armagh’s attacking options but Sligo were a side the Orchard men took care of without their star man.

The key moment came only four minutes into the second half when Sligo keeper Aidan Devaney kicked straight into the arms of captain Rory Grugan who didn’t need a second invitation to punish and he rammed his shot into the net.

That gave Armagh a four point lead and they pushed on to actually go ten points ahead before conceding a last gasp goal to Sligo’s Cian Breheny.

That took the shine of a convincing and worthy win, but also gives the Orchard defence something to keep working on, even though they were solid on Saturday.

The Armagh players wore black armbands and a minute silence was observed as a mark of respect to Darren McKenna, whose father Eamon passed away on Friday.

Sligo raced into an early 0-3 to 0-1 lead with their star man Liam Gaughan grabbing the opening point with the outside of his boot. Rory Grugan levelled with a brilliant tight angled score, following a clever pass from Forker before Niall Murphy and Gaughan extended the Yeats men’s lead.

Charlie Vernon carried much of Armagh’s attack from midfield and the Harps man took quite a battering and was awarded a few frees, one which keeper Blaine Hughes scored.

Interestingly Aidan Forker took up a role at full-forward with Andrew Murnin positioned along the 45-metre line, but the St Paul’s man was busy setting up attacks and provided Sligo with problems.

There was some lovely set-pieces involving Forker, Grugan and Murnin as Armagh stretched Sligo’s defence and Grugan and Ryan McShane tagged on points to level the score.

They were level again when Grugan and Gaughan traded scores before Marren kicked a free between the posts to keep Sligo’s nose in front.

It was end-to-end football with neither side winning the midfield battle outright but Sligo built on their lead with two further Gaughan converted frees after Forker was black-carded.

The half was almost up when Armagh rallied with Murnin receiving Grugan’s pass to point, then Grimley converted a free to point and the magnificent McShane played a neat one-two with Murnin to drill his shot between the posts and all of a sudden Armagh where a point ahead at the break.

That good work continued in the second half with Grugan's opportunist goal and Armagh continued to press.

Jemar Hall, who made his second start in a row, was again excellent and his point kept Armagh on the front foot. Sligo though weren’t giving up, and Marren, Sean Carrabine and Gaughan hit back with points.

Still though, with Sheridan on the pitch and Grimley directing shots between the posts it looked like Armagh’s game to lose. Grugan converted a free and substitute Joe McElroy scored with his first touch, showing his role is in attack, not defence, as the Orchard men led 1-15 to 0-12 with 15 minutes to play.

Sheridan and Shane O’Neill’s hard-working Connaire Mackin tagged on points and fittingly Grimley and Grugan added to their tally to lead 1-19 to 0-12 with 71 minutes played.

However, it was job done and Armagh are still in the competition and importantly playing with smiles and giving the large crowd something to cheer about for their long spin home.

McGeeney praised the large number of fans who travelled to Sligo town but while welcoming a home draw against Clare he wasn't getting carried away with home advantage.

“It doesn’t matter where we play, it is going to be against quality opponents.

“Most genuine Armagh supporters know the story, so we just have to try and ignore the rest.”