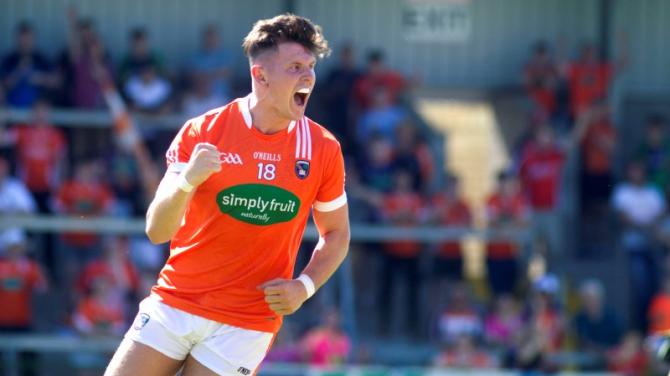 The sentiment to that catchy tune penned by rock band Journey was tested to the limit on Saturday as Armagh pulled off an almighty comeback to shake off a stunned Clare.

Make no mistake about, the Armagh young guns were on their knees, the game was up and the season over. Clare had fired everything they had at Armagh and looked certain to have secured a place in Monday’s draw.

Nothing seemed to be going right for Armagh as Niall Grimley and Rory Grugan screwed free kicks wide they would normally stroke over and players were slipping at crucial times and passes missing their target by inches.

But credit to this Armagh team, they don’t know when they are beaten and they blitzed Clare with a magnificent 1-4 in the final few minutes to steal victory.

For the third game in a row, fresh legs got Armagh over the line and the substitutes made a massive impact, none more so than the goal-scorer Joe McElroy.

The Athletic Grounds was rocking, 5429 fans were in full voice, and while it may not have been good for the hearts, it certainly was nourishment for the Armagh souls as the frenzied celebrations at the final whistle proved.

It is a game that should stand to this young Armagh side, because they were not ever going to get enough credit for beating Sligo or Westmeath, but Clare were a different beast. A Division Two side that has beaten Down two years in a row and that wasn’t far away from promotion to Division One this year.

And they showed Armagh their credentials but when substitute Joe McElroy fired home his 70th minute goal, Grugan quickly nabbed two critical points his club-mate Gavin McParland fisted over and his fellow substitute Ross McQuillan and the experienced Aidan Forker all pointed to turn the game on its head.

Even with the seven minutes of additional time announced it should have been anyone’s game, but Armagh’s resolve stood strong whereas Clare were clearly shell-shocked and understandably had the will sapped out of them.

Each of the young players have grown in strength and stature as the season has progressed and the cohesiveness of the squad is something special. Something Aidan Forker said at the start of the season struck a chord with me. He said this squad is not made up of Superstars but they want to improve as a collective.

And that is what they are doing.

Nobody is calling Armagh world beaters but they won’t fear Roscommon.

Dromintee’s Aaron McKay was happy to be into the next round of the Qualifiers and he praised the effort of the squad on Saturday.

“It is good to get over the line and we always knew it was going to be tough because Clare have been playing in Division Two all year and it stood to them,” said McKay.

“We are glad to get over the line especially considering the penalty and the rebound going in.

“I just want to keep pushing the whole team on, we have a massive squad and especially with the U20 coming back in after their unfortunate U20 Ulster Final defeat. It is good to have them back pushing us on in training during the week.

“They are pushing for a spot in the starting 15 and it is not about individuals it is about the team getting a result every week and that is more important.”

With the heat soaring to the high 20’s by the time of the 3pm throw-in it was Clare’s Jamie Malone bagged the opening point but only after Armagh kicked three wides in a row and that signalled a theme that continued for the Orchard men.

Niall Grimley and Grugan (3) tapped over frees as Armagh took a 0-4 to 0-1 lead. Their fast running at the Bannermen drew fouls and the Orchard men seemed to be growing in confidence.

But Clare hit back with two points in as many minutes from Pearse Lillis and the busy Eimhin Courtney. Keelan Sexton levelled the score on 14 minutes before David Tubridy put Clare in front and it was the Bannermen who were now on top.

With 20 minutes played Armagh badly needed as score but captain Grugan kicked a tricky free-kick wide and Clare punished with Jamie Malone firing over a great point. Murnin blazed a shot wide and Forker couldn’t reach Grugan’s attempted pass and it was little things like this that were going against the Orchard.

Still Armagh pressed and when Forker was fouled Niall Grimley converted another free and then the sides were level when the brilliant Ryan McShane finished off a slick move with a point following brilliant build up play by the forward surging Greg McCabe and Mark Shields.

It was an inspirational score but there was no time to build on that momentum as straight away Clare’s Courtney hit back with his second point. Armagh kicked nine wides in the first 30 minutes and that almost came to haunt them but Orchard keeper Blaine Hughes pulled off a brilliant save to deny the quick-footed Jamie Malon a goal

And Armagh responded with Andrew Murnin swooping in at the back post and drilling over the bar. While Stephen Sheridan and Charlie Vernon dominated the early midfield battle, Clare’s Gary Brennan and Cathal O’Connor started to assert their authority.

Eoin Cleary’s point gave Clare a one-point lead with 33 minutes gone and while Forker and Grugan were just missing threaded passes Jamie Malone kicked his third point to give the Bannermen a two point lead at the break.

They made intelligent tackles, looked composed and started to win the battles that they struggled with in the second quarter and the Armagh crowd started to find their voice.

Armagh kept pressing with Jemar Hall, Sheridan and Ryan McShane testing the Clare defence. But the Bannermen’s defenders made several telling interceptions, with Eoghin Collins getting the hand in to prevent Vernon from receiving a return pass, which would have set up a goal. And at the other end Lillis and Cleary stretched Clare’s lead to three points.

Following a long stoppage to allow Clare’s injured keeper Robert Eyres be replaced by Keelan Roache, it was the Bannermen that strode ahead with points from David Tubridy and O’Connor but importantly Grimley replied with a converted free.

Heading into the last 15 minutes Armagh needed something special and it came when Forker went wide towards his left corner of the pitch and drilled low towards goal to pick out Murnin, who, with his back to goal, turned his marker and hammered into the net.

It was game on as the Orchard men trailed by only a point. Armagh should have gone level but Grimley kicked wildly wide from 14-metres. Tubridy and Cleary kicked further points before Grimley kicked another bad wide and Clare could have struck the net but Keelan Sexton missed the target.

Grugan kicked two important points to leave a point between the sides with five minutes of normal time remaining. Just enough time to nick a win.

But Clare were awarded a penalty when substitute Ryan Owen’s dropped a high ball and as he attempted to retrieve it he accidentally fouled Courtney and there was no complaints about the penalty being awarded. Blaine Hughes did well to block Tubridy’s spot kick but the shooter followed up to drill home.

Armagh trailed by four points with as many minutes of normal time remaining and they had it all to do.

“Probably in the past we would have been criticised for wilting and losing a lead and losing games but especially this year we have tried to keep fighting for everything until the final whistle,” said McKay.

“At four points down with only four or five minutes to go, so we had to play man to man and go for it.

“We had no other choice and we have practised our game management and different scenarios from being ahead and being behind and thankfully it worked.”

Indeed it worked a treat.

With 69 minutes played Grimley stroked over an important point and only 60 seconds later Joe McElroy hammered home a brilliant goal, set-up by the determined Murnin, to level the score.

The Armagh fans were off their seats and didn’t have time to sit down again before captain Rory Grugan engineered and kicked the Orchard side into the lead as seven minutes additional time was signalled.

Substitute Gavin McParland then cleverly fisted over a point and Grugan stoked over another as they tore into a now ragged Clare. Forker capped off a hard afternoon’s football with an important insurance point.

It was tense and exhilarating football and this Armagh team will be all the better for it.