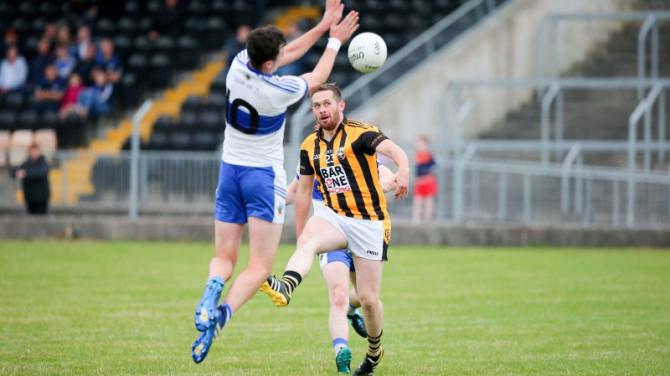 CROSSMAGLEN Rangers showed why they remain diners of Armagh’s top footballing table with a comprehensive win over rivals Dromintee.

The 16-point winning margin sent a warning shot out ahead of the Armagh Club Championship but they may have to do without the services of talisman Rian O’Neill has he was red carded after reacting to being punched in the ribs.

Played at St Oliver Plunkett's Park, Crossmaglen on Friday night, it wasn’t at all a dirty game but the game finished on 14-men apiece after Dromintee's Sean Wade got is early marching orders for a straight red after Crossmaglen’s Paudie Stuttard was thumped from behind.

So while those scenes did little for the game, it was a blip in an otherwise impressive Crossmaglen performance.

Young O’Neill was simply outstanding, Dromintee couldn’t cope with his searing pace and his positioning was excellent as he got on the end or in the middle of several slick scoring moves.

Rangers captain Aaron Kernan also looked sharp and he tortured Dromintee down the right hand side of pitch and his kicking was accurate too.

Crossmaglen’s Paul Hughes and James Morgan were back in the side and Morgan was his typical strong committed attacking defender, while Hughes was solid in defence.

Tony Kernan and Mickey McNamee popped up with points while substitute Johnny Hanratty proved more than a handful and he kicked a beautifully executed tight angled curled effort that squeezed between the posts.

Dromintee found the going tough but they would have been further behind had it not been for the spectacular saves from goalkeeper Philip McEvoy. The former county shot-stopper denied former county forward Tony Kernan a certain goal when he dived high to tip the shot over the bar.

It was a game Crossmaglen were in control of as Stephen Morris and O’Neill lorded the middle of the field and with Aaron Kernan pressing high awaiting the lay-off, Dromintee had no answer.

Rangers were 0-6 to 0-1 ahead with ten minutes gone. Aaron Kernan kicked two points, one a free, while Rian O’Neill struck the remaining four, from a 45’, from 50-metres and what he makes look effortless, a catch and kick between the sticks.

He grabbed the seventh point too before C13 stretched the tally. It was no surprise that Crossmaglen bagged a goal and even less a that it was that man O’Neill who had the finishing touch to a rapid five-man move.

When Aaron Kernan kicked over with his left peg, following Morgan’s ‘mark’ they led 1-09 to 0-01, but Dromintee had a late rally before the break with Peadar O'Hare and Cathal McKenna but Rian had the last say of the half with his converted free.

Dromintee's Aidan Morgan and O’Neill traded points but the Droms where making the game more of a contest during the second half. Conor Martin kicked from long range but Tony Kernan replied with his converted free.

Cross were 1-12 to 0-05 ahead when O’Neill received his red card, Aaron Kernan and Mickey McNamee kept the scoreboard ticking over.

Hanratty offered Cross a physical presence up front and Dromintee resulted in fouling him, which allowed Tony Kernan to punish and he steered over a fine 45’ too.

Dromintee’s Wade was also sent off, while the Droms sensibly substituted Cathal Fegan, whose play got reckless.

Hanratty and Tony Kernan completed the scoring for Rangers.

Cross still have the injured Paul Hughes and David McKenna to return to action next month, while Oisin O’Neill’s return from the States will also be a boost in the Club Championships next month.

Cross won’t be entirely happy with their own performance due to the standards they demand and this was clear by the vocal captain Aaron Kernan and Sunday's defeat to Clann Eireann will only emphasise they still have work to do. But players such as Alan Farrelly, Aidan Rushe and Rico Kelly impressed.

Dromintee weren’t at full-strength but they have done well this season to retain their place in Senior League A and they'll be more concerned about being ready for the Championship.