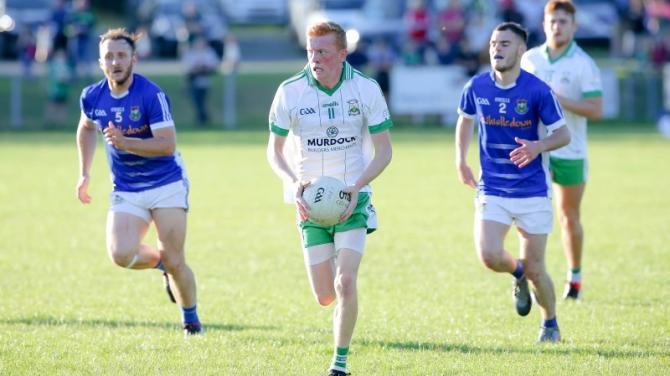 STEADY nerves and sheer skill sent Burren top of the Down Division One League table with a dramatic derby win over Warrenpoint.

It was an exciting finale to a heated contest as CPN looked like they had snatched a, late, late draw when the powerhouse Jamie Grant punched home an injury-time goal after Aaron Joe Magee’s long delivery.

Two minutes additional time had been played and St Peter’s looked to have done enough to have retained their perch at the top of Division One.

But Point substitute Owen Henry gave away an unfortunate accidental free and young Ronan McGrath, or the Gouch as he is known to his team-mates, converted from 21-metres.

Still though there was no final whistle and St Peter’s had a chance to draw the game again but Ross McGarry’s rushed shot drifted wide, it was a chance worth taking but he had more time for options. And Burren punished as they wasted no time in attacking with the exciting Liam Kerr firing over the insurance point.

It was a great game of football played at a tempo both teams wanted ahead of the start of the Senior Club Championship this week.

Burren finished the game with 13 men after goalscorer Shay McArdle was sent off (second yellow card) and Ciaran McGovern received a black card, while CPN were also down in numbers after John Boyle received a second yellow.

John Boyle and Shay McArdle were stuck in a great battle throughout the evening in a game played not far off full throttle at stages.

Neither side showed their true hand ahead of this week but it was a game both sides wanted to win. Warrenpoint more so though as victory on Friday would have put them four points clear and put them on a path towards the League title.

League winners’ medals don’t mean much to teams such as Burren and Kilcoo but the St Mary’s side are on course to do just that even as the greater prize awaits, with the Senior Club Championship campaign starting at the weekend.

Played in Moygannon on Friday it was the young Liam Kerr that caught the eye and imagination from the throw in as he ran straight at goal evading a number of challenges before firing at the net but Point keeper Gary McMahon pulled off a great save to deflect the ball over the bar.

Ross McGarry starred at the other end despite being marked by former Down captain Kevin McKernan. He opened Warrenpoint’s account with a difficult tight angled point.

And the Seaside town stretched their lead with Niall McGovern converting a free and Ross McGarry finishing off a great move started by the brilliant Ryan McAleenan’s interception. McGarry also tapped over a free to give St Peter’s a three-point lead.

The vocal McKernan wasn’t happy how easy the CPN men were getting through the middle of defence but he needn’t have worried as McGrath’s free closed the gap and then Steve Fegan got onto the end of a sweeping move to slot his shot under keeper Gallagher for a cracking goal.

Kerr added a point after a simple Mark Rooney ‘mark’ and pass but John Boyle stemmed the Burren tide with a fine point after powering through a number of robust tackles.

McKernan then delivered a delicious 60-metre pass into the arms of Kerr and without halting his stride the orange booted forward tapped his shot over.

It was a great game to watch between two neighbouring teams with family’s divided on the field and on the side-lines.

Young Aron Darcy was given a torrid time by Kerr in the opening half and it was surprising there wasn’t a switch. Cathal Foy tapped over a point to give Burren a three-point lead but the Seasiders rallied late in the half and points from Niall McGovern (free), McGarry (free and 45’) left the sides level at the break (0-08 to 1-05).

But Warrenpoint would have been ahead as Ryan Boyle had stormed through towards goal and just as he was about to pull the trigger young Ardan McAvoy got a hand in to punch the ball away from danger to concede a 45. It was brilliant defending.

Kerr edged Burren ahead immediately after the restart before the Point kicked three wides in a row and then Conor Cox fisted over the bar for the St Mary’s men.

Burren seemed to be slowly pulling away even though Point enjoyed much of the possession and even though McGarry replied with a free, Shay McArdle’s goal on 44 minutes should have put Burren home and hosed, especially after Foy and substitute Ryan Treanor tagged on point.

Shortly after a nasty but brief fight between the sides the sendings off took place and the game opened up a little. Burren’s Paudie Poland gave his side a six point lead with nine minutes of normal time remaining.

And the Point got to work.

Warrenpoint pressed and the lively substitute Aaron Joe Magee fired into the box big Grant hammered into the net to level the score.

The 60 minutes were up and a draw was good enough for the Seasiders but then came those frantic four minutes of additional time, where Burren did enough for a hard earned win.