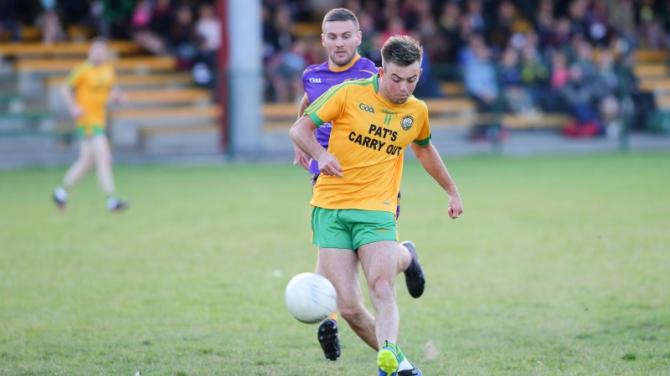 BALLYHOLLAND bounced into the backdoor of the Down Senior Club Championship following Friday’s defeat to the up and coming Carryduff.

The Duff were worthy winners in a game the Harps could have done better.

They kicked eight wides in the first half and that came back to haunt them.

A brace of goals in the early stages of the second half left Ballyholland trailing by six points and although they did show plenty of heart and hunger they couldn’t prise open Carryduff’s stubborn defence.

Joe McFlynn gave a masterclass in free-kicking from his hands, all but one of his five points were kicked from 40 or more metres and he makes it look effortless.

There were bright performances from Tiarnan Rushe, he missed Newry City AFC’s first Premiership win, due to his commitment to Harps and his kicking kept the south Down men in the contest in the opening half and he also tried to conjure up a goal with his pacey direct running.

Played in St Patrick’s Park in Newcastle, which has become a home from home for Ballyholland due to how frequent they have played there in recent years.

But it shouldn’t be hosting evening games. The lights aren’t fit for purpose and if you can’t see from one end of the pitch to the other, then there shouldn’t be an £8 charge to the ground.

Not that it is a reason for Ballyholland’s defeat because Carryduff played in the same conditions, but the comfort of fans and safety of players should be a consideration when fixing games.

Ballyholland got off the great start with Mark Walsh and Rushe tapping over, Denise Guinness replied but Rushe’s second point after Ronan Murtagh’s intelligent low pass, showed that the Harps could create scoring chances.

Ruairi Quinn was driving his team forward and with Patrick Quinn also back in the side, Ballyholland possessed scoring power but dispite that early momentum it was Carryduff that hit back and the sides were level on 15 minutes after Flynn converted his first free and Sean McGonigle tapped over a point.

Rushe’s third point seemed to suggest the Ballyholland had the measure of their opponents but Carryduff met Harps point for point, but Ballyholland’s shooting deserted them. John Henry and Joe Flynn kicked Carryduff into the lead as Harps kicked three wides in a row.

Duff also could have went further in front but Michael Ennis’ shot flashed across the face of goal.

Harps needed to get a grip on the game and Murtagh scored a inspirtinal point by simply running straight, riding tackles and drilling over the bar to level the score at 0-5 apeice with 25 minutes gone.

Again Ballyholland had a chance to go ahead but they kicked wide and McFlynn gave Carryduff the lead before Walsh squared matters up before the break.

The second half was a minute old when corner-back Patrick McConnell finished a sweeping move into the net.

McGonigle quickly tagged on a point and while Murtagh launched a fine score between the points, the Harps invited Carryduff onto them and the quick Daniel Guinness bagged the second goal of the game with 38 minutes gone to give Carryduff and brief six point lead.

Murtagh hit back with a point immediately and with 20 minutes remaining Ballyholland had time to get back into the game. But there was no heroic comeback.

Carryduff’s defence was brilliant and with light fading fast Harps were forced to kick from distance with mixed results. Rushe and Tommy Kane registered points but it wasn’t enough.

Ballyholland were disappointing and that collectiveness that you usually associate with the team was lacking and perhaps the introduction of Patrick Quinn and Ruiari Campbell upset the balance.

But the Harps won’t have long to lick their wounds and a response will be expected in the backdoor.

Manager Justy Lynch has Carryduff playing a great brand of football. They are physically strong, tall and quick and Ballyholland may not be the only scalp they claim.