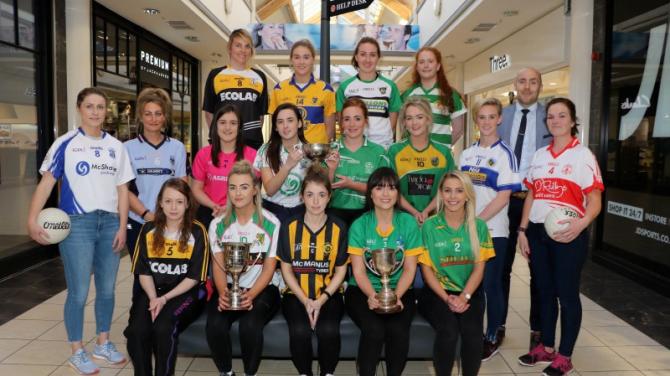 FOLLOWING Armagh’s All Ireland exit, the Orchard club scene takes centre stage with the Senior and Intermediate quarter-finals of the inaugural Buttercrane Centre Championships scheduled for this Saturday evening.

The biggest game locally is the south Armagh derby battle between reigning Intermediate champions Crossmaglen and their Silverbridge visitors who are unbeaten this season and have already wrapped up the Division Two title.

Indeed the only match Silverbridge haven’t won in 2018 was a draw with Cross and this should be another close contest which could go either way, with inspirational skipper Lauren McConville likely to be an influential figure for the hosts.

Managers Maria O’Donnell and Peter McMahon worked wonders with a largely young Cross side last season as the surprise packages overcame the more fancied duo of Dromintee and Sarsfields to claim the trophy.

Reaching the Senior semis may not be beyond them but an away win for a Silverbridge side starring Armagh’s Mairead Tennyson and Niamh Reel could set up a repeat of last season’s last four clash with Carrickcruppen.

Before then Cruppen face a tricky tie at Abbey Park against Armagh Harps in a repeat of the 2015 county final which brought the most recent of the Lowe’s Lane ladies’ three Senior Championship successes.

Harps have had a couple of really lean years since but have high hopes this time under new managers Paddy McShane and Paddy Toner while Queen’s manager Mark Doran is in his first season as Cruppen boss.

The other new face at Lowe’s Lane this season is Armagh stalwart Sharon Reel following her transfer from Killeavy and she will add to an experienced core led by iconic captain Caroline O’Hanlon and rejuvenated county colleague Marian McGuinness.

Captain Fionnuala McKenna, Kelly Mallon and former Newry City Ladies soccer captain Aoife Lennon are the big names in the Harps ranks but Carrickcruppen’s championship pedigree should see them through against a team with whom they share second place in Division One.

Badly missing long-serving skipper Louise Kenny following her second cruciate rupture, Shane O’Neills have struggled this season with only one win and a draw from ten league games which doesn’t augur well for their trip to face Clann Eireann.

Few would bet against the Lurgan giants completing a third successive season unbeaten in domestic competition, especially with the signing of Tiarna Grimes and return from Australia of her county colleague Maebh Moriarty further strengthening the strongest squad in Armagh.

Even with Aimee and Blaitihn Mackin in their ranks, Shanes will do well to avoid a repeat of their heavy defeat in last season’s semi and a similar fate awaits either Grange or Lissummon in the last four stage this time.

There are five local clubs in the Intermediate tier and, with two derbies this Saturday, south Armagh will have three representatives in the semis if Dromintee can win away at Sarsfields, who contested the last two finals but have struggled this season.

The winners will meet Mullaghbawn unless Killeavy can pull off a first victory of the season while Forkhill start favourites away to neighbours Lower Creggan as they attempt to set up a semi-final against either of the last two Armagh Junior champions, Granemore or Ballyhegan.

Clann Eireann Seconds face Clonmore and Mullabrack meet Tir na nOg in Saturday’s semi-finals of this season’s Junior Championship, with all three tiers being backed by the new Newry-based sponsors.

“Armagh LGFA is delighted that the Buttercrane Shopping Centre has come on board as headline sponsors of our flagship domestic competition, the adult club championships at Senior, Intermediate and Junior level,” says county chairperson Sinead Reel.

“Club football is the lifeblood of our sport and championship success with your club is a highlight in the career of any player.

“Ladies gaelic football has never enjoyed greater profile or popularity and this investment by such an established brand is a big boost to the sport locally in terms of finance and prestige.

“I would like to thank our new sponsors and pledge Armagh LGFA’s full and enthusiastic commitment to building a productive partnership.

Best wishes to all the teams competing in the 2018 Buttercrane Centre Championships.”