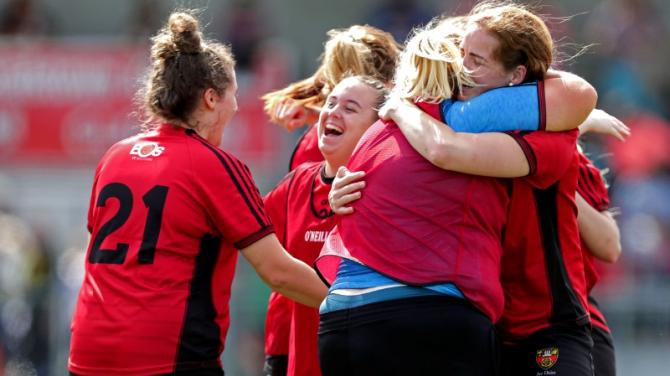 DOWN camogs have reached the Liberty Insurance Intermediate All-Ireland Final after beating Tipperary 1-13 to 2-08 on Saturday.

The Mourne girls went into the game as underdogs but since that famous comeback against Laois in the quarter-finals they just don't know when they are beaten.

It has been a fairytale story given at the start of the year they had no manager and seemed to be drifting into the abyss but Tina Rooney took charge when no-one else would give the girls a chance.

Former All-Star Fionnuala Carr resisted from hanging up her stick and answered Down's call and now they will end their season in Croke Park, with 60 plus minutes of camogie to win an All-Ireland title.

Played in Kinnegad, Co Westmeath, on Saturday, Down's place in the final looked as far away as ever as Tipperary led 1-07 to 0-04 at the break.

There were a couple of changes from the win over Laois with Saoirse Sands replacing Maria Higgins at corner forward and Blainaid Savage replaced Orlagh Caldwell in the half back line.

The most surprising switch was Fionnuala Carr taking up the full forward position, Dearbhle Magee took the centre half back spot.

The girls settled quickly and raced into a three point lead, Niamh Mallon successfully converted two frees and Dearbhle Magee scored a fabulous point coming out of defence with the ball.

Tipperary began to come back and converted two frees. At this point Down were guilty of shooting a number of wides and three into the keeper’s hands.

Saoirse Sands made great work tackling the keeper and dispossessing her only to be blew up for a free out after she hand passed to the net, the ref penalising her for picking the ball of the ground.

Tipperary drew level at three points all and were starting to capitalise on some errors that the Down girls were making, they appeared to be nervous and struggled to get the ball under control.

Tipperary went a point up before Down equalised after another Mallon free.

It was at this stage that Tipperary pulled away and they rattled in a goal and three points to take that half-time lead.

As we have seen so many times this year with this team they were a different animal in the second half and slowly but surely they clawed their way back into the game. At this stage Fionnuala was back in her more familiar position in defence and this seemed to settle the team.

Down pulled it back to one point when, completely against the run of play, the Tipperary full forward won a ball and raced through to score a goal.

This didn’t deter the Down girls and straight from the puck out Sara Louise scored a point. Every Down player stepped up when it mattered and blocked and hassled as if their lives depended on it and picked off another two points.

Then came the goal. Down keeper Maria McNally blocked a Tipp shot where Fionnuala picked up the ball and played a magnificent pass to Niamh Mallon who looked up and spotted that Sara Louise Carr had peeled off her player.

Mallon delivered the inch perfect pass straight into Sara Louise’s hand and off she went and drilled the ball past the Tipperary keeper to give the Mourne women the lead.

And Aimee McAleenan sent over a lovely point following a clearance from the defence, this put the Down girls two points up and following six minutes of injury time there was a relieved and ecstatic bunch of girls when the referee finally blew for full time.

It was a wonderful win but a bigger prize awaits.

Down will play Cork in the All-Ireland Final on Sunday (September 9) in Croke Park.