Warrenpoint give extra against Glenn 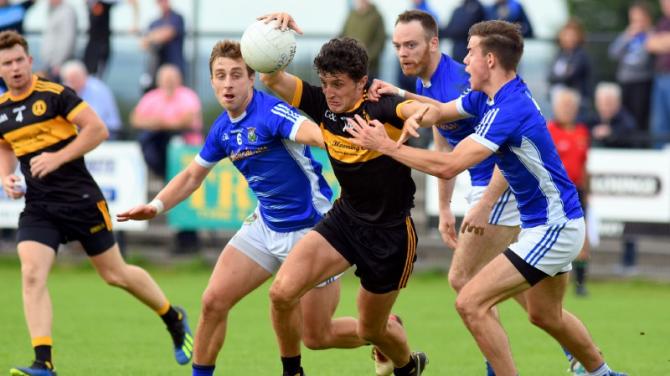 IT wasn’t pretty nor was it gritty but CPN did enough to book their place in the last eight of the Down Senior Club Championship on Saturday.

They needed extra-time to get past Glenn, when really they had the job done within normal time.

The how and why may matter little to the team that won, but if St Peter’s don’t learn from Saturday’s performance they may not go much further.

As expected Glenn pressed Warrenpoint and they have a great knack of smothering teams, as they suffocated Downpatrick into submission only a week earlier, but the Seasiders played into their hands with their static approach and almost got caught out.

It was tense stuff, with several battles all over the pitch and Warrenpoint’s John Boyle and Glenn’s Niall McParland stuck to each other throughout the game, but importantly Boyle got forward to set up scores.

Played in Mayobridge on Saturday, you could have hosted an U10 game on the Mayobridge Road side of the pitch because the ball rarely was played on the left hand side, nor too often on the right side either, which left a congested contest with more turnovers than the Shelbourne in Newry.

It seemed as if avoiding losing was more important than winning and both teams were content to hang on to each other until the last moment.

And that is what happened as they were level for the ninth time when Kenny Bagnall’s free-kick somehow landed in the net in the 64th minute to send the game into the extra-time.

But there was a bit of football played before that point. Down’s Shay Millar gave Glenn the lead before Newry City’s John Boyle replied after a neat one-two with Ross McGarry. Ronan Millar’s 40-metre converted free was following up with a brilliant bustling run from young Jack McCartan and he weaved his way through the defence before drilling over the bar.

Aaron Joe Magee kicked over for the Point thanks to nice work from Ryan Mallon and a converted free from goalkeeper Gary McMahon had the sides level on 0-3 each.

Warrenpoint could have bagged a goal when Niall Trainor chased what looked a lost cause, he cut in side but his shot crashed off the post but fortunately Aaron Joe Magee followed up and kicked over.

Two converted Ronan Millar’s frees gave Glenn the lead but the sides finished level at the break thanks to points from Ross McGarry (free) and Mallon.

Unsurprisingly the sides were level again ten minutes into the second half as Jack McCartan, Jarlath McConaghy and Ronan Millar scored for Glenn while McGarry (free), Niall Trainor and Mallon hit back for CPN.

With the sides pushing and probing Warrenpoint started to pull away in the final ten minutes. Substitute Alan Davidson gave the Seaside side an extra avenue up front, but Warrenpoint weren’t making the runs into space they would usually do.

In one move where John Boyle kicked from the left side of the field to the unmarked Ryan Magee, he kicked Warrenpoint into the lead.

And they were closing in on goal when Ryan McAleenan hauled a player down to concede a free. He was subsequently black carded and when the ball was punched away referee Paul Faloon moved the free up to the 21’.

Warrenpoint lined the goal line while Glenn had players at the edge of the square which is where Kenny Bagnall aimed his free, but the shot bounced over the defence and keeper and into the net.

Glenn couldn’t believe it nor could Warrenpoint but it was the last kick of the game and forced it into extra-time.

Warrenpoint had taken a two point lead in the first 10-minutes of extra-time, following points from keeper McMahon and Davidson but John Boyle made a surging run to set up Ryan Magee and he fired home for a fine St Peter’s goal.

They led 1-15 to 1-10 with ten minutes remaining and while Glenn won the second half of extra-time 0-2 to 0-1, with points from Ronan Millar and Bagnall and Ryan Magee, CPN had done enough to record the win.

It was a tough defeat on Glenn, but Warrenpoint were worthy winners and they fought hard for victory. They have a three weeks rest for the quarter-finals, while Glenn are out again next week after last (Monday’s) night’s draw.