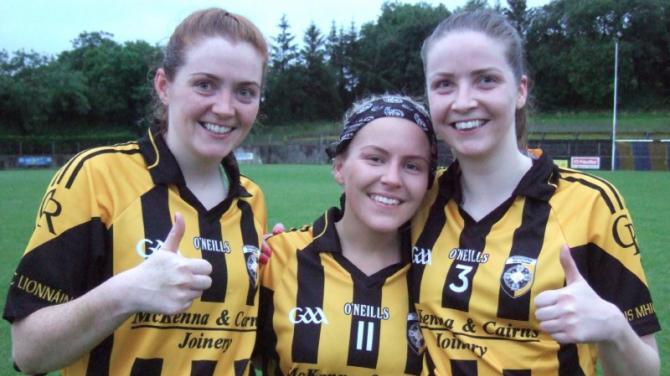 ARMAGH ace Lauren McConville kicked a magnificent seven points from play in her double digit haul and Alex Clarke scored two good goals as Crossmaglen got over the line in a Friday night thriller at Silverbridge.

McConville had captained Cross to the Armagh Intermediate title last season with a series of inspiring performances and she shouldered responsibility brilliantly in this breathless Buttercrane Senior Championship quarter-final.

Frequently dropping deep to pick up possession, making surging runs half the length of the field, repeatedly picking herself off the floor after heavy hits and getting her team’s last six scores, McConville was at the heart of everything for the visitors.

Just as the daughter of Jim McConville and niece of Oisin is living up to her famous surname, Armagh genius Jamie Clarke’s little sister has the potential to become a force in her own right judging by the quality of the 16-year-old’s first finish in particular.

Overcoming Carrickcruppen in this season’s semi may be beyond them but Crossmaglen’s future looks bright with plenty of exciting talent being brought through by impressive managers Maria O’Donnell and Peter McMahon.

They were without eight of last season’s successful squad last Friday night, including former county panellists Mairead Watters and Marie Luckie, who broke her left wrist and right hand as Crossmaglen camogs shocked Cullyhanna the previous week in the Armagh Intermediate semi.

But five players proved their commitment by coming home early from Donegal’s Gaeltacht on Thursday night and, not for the first time, Cross showed what championship mode means with a whole-hearted display that delivered victory in the end.

Silverbridge had gone through the entire season up until now unbeaten but were eventually edged out after a cracking contest as two well-matched teams went at it with all they had as darkness fell.

The hosts led 1-10 to 2-5 at the interval and, although Cross started the second period strongly to draw level with two points in just over the opening minute, a Silverbridge goal late in the third quarter gave the hosts a big boost.

The subsequent sinbinning of newly-crowned All Ireland Under 18 boxing champion Shauna O’Callaghan hardly helped the Crossmaglen cause but the entire team showed fantastic fighting spirit even when it felt like luck wasn’t on their side and close calls weren’t going their way.

A McConville goal was disallowed due to a square ball but she kept putting the ball over the bar both from play and also set-pieces after taking over the free-taking duties from her successor as skipper, Aveen Donaldson.

Clarke’s second goal which brought Crossmaglen level in the 52nd minute followed a fantastic carving run from deep by McConville, who then nudged her team ahead for the first time since the sixth minute after Roisin McShane had bundled home an early goal.

Niamh Reel equalised within a minute, her score making it 2-14 to 3-11, but McConville followed up with a point after Clarke came agonisingly close to a hat-trick when her shot struck the underside of the crossbar.

A home player finally saw yellow when Lauren Mackin was sinbinned for a high tackle on McConville after she claimed yet another opposition kickout, and the lion-hearted centre half forward dusted herself down to put her team two up with the free.

There were four minutes of injury-time and, in a last surge, Silverbridge got a point before being given one last chance only for former All Star Mairead Tennyson to send a longish free just wide with the last kick of a pulsating game.

Like her Orchard colleague McConville, Tennyson had brought her inter-county intensity to this tussle, typically injecting conviction and pace into attacks, kicking an early free, delivering a classy left-footed finish to the net in the first half and pointing early in the second.

They spurned several good goal chances however and, although the Cross defence deserves much credit for applying pressure, Silverbridge really missed Denise Buckley who, like fellow former county panellist Megan Burns, is sidelined with a torn cruciate.