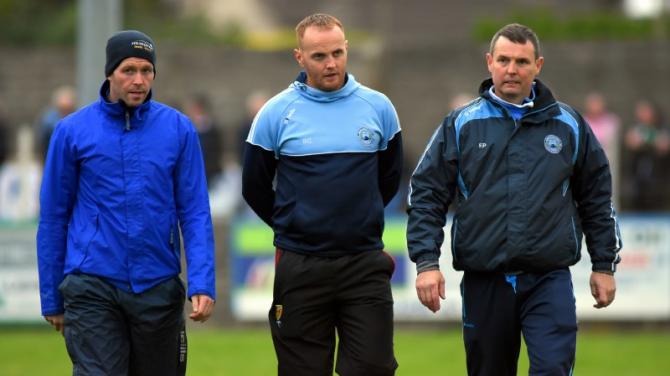 THE DOWN Senior Club Championship will explode into life on Friday when Clonduff and Mayobridge clash.

The fixtures committee have pitched the right game to kick-start the weekend of quarter-finals and it is a clash that should whet the appetite.

Clonduff are coming good at the right time, having slipped up against Saval in the opening but they were convincing winners the second time the sides met. Mayobridge too defeated Saval but it required a late rally to secure their place in the quarter-finals.

The O’Hagan brothers Darren and Barry are vital to Clonduff’s cause and the Yellas await to see if Arthur McConville will be fit enough to join his increasingly more influential brother Stephen into the game.

The Sky Blues have looked an assured outfit this season and the weekends League win over rivals Burren will have boosted confidence. Shane Annett is an exciting young player and he should have a bright future with the Bridge, while Ronan Sexton is back playing his best football up top.

And Francie Poland who manages Mayobridge along with Benny Coulter and has also drafted in former Armagh captain Ciaran McKeever to the back-room team, accepts his side need to be at their best on Friday evening.

“Clonduff put in great performances against both Saval and Ballyholland,” said Poland.

“They are a quality side with quality players so we will be up against it. It will be a tough game. The team that produces the goods on the night will win – which ever team plays best.

“Sometimes we blow hot and cold but if we perform we will win. I’ll say it again: If we perform.”

Mayobridge are pre-match favourites but expect Clonduff to push them all the way.

The game will be preceded by the Intermediate Club Championship clash between Annaclone and Bredagh. Annaclone are always a good Championship team and should provide Bredagh with tricky opposition but the Belfast men should have too much. Throw in is at 6.45pm.

Defending champions and seven in a row chasing Kilcoo are favourites to defeat RGU Downpatrick in Newcastle on Saturday (September 8) at 5.30pm.

The Magpies were almost caught by Castlewellan in the opening rounds and again in the League at the weekend and that will be enough of a wake-up call. Kilcoo still know how to win Championship games and while they may not have ripped up many trees with performances so far this season, they are still the team to beat.

Conor Laverty remains a pivotal forward for Kilcoo. He wins much of the primary ball and links the play together and he has a great understanding with Jerome Johnston.

RGU are undoubtedly underdogs. They held off a late rally from Glenn. Big Pete Turley has been outstanding this Championship and Downpatrick will need Turley and his brother Damien to be in their best form if they have any chance of producing a shock.

Don’t expect an open game but Kilcoo should possess more than enough craft and firepower to secure their place in the Down Senior Club semi-finals.

Ballymartin face Saul in the Intermediate curtain-raiser. The Whites have already beaten Saul in the opening round and if this Championship season is to go by then Ballymartin will need to be at their best to overcome Saul again, which throws in at 4pm.

Championship action returns to Pairc Esler on Sunday night when Burren take on Castlewellan in what should be a great battle.

The Town probably should have beaten Kilcoo in the earlier rounds and they impressed in their dismissal of Bryansford.

Timmy Hanna, Conor Maginn, Sean Dornan, Daniel Morgan and Donal McKibben are big players for the Town and if they perform they have a great chance of winning.

But Burren boast a big squad. Injury to Donal O’Hare has ended his participation in this year’s Championship, which is a huge blow, but players such as Padraig Poland and Liam Kerr have stepped up to the mark.

And Burren boss Paddy O’Rourke says his side are ready to do battle.

“It’s going to be a very tough game. Castlewellan have improved greatly as the season has gone on and they now have all their players back,” said O'Rourke.

“They beat Kilcoo two matches back and then they had a good win against Bryansford. Plus they are a Championship team with a lot of quality players.”

On Burren’s long injury list that includes sharpshooter Donal O’Hare, the Toner brothers, Peter Fegan and Ryan Treanor the Burren boss said: “We hope to have some of them back but it’s touch and go. The players have to prove they are fit between now and the Championship and you can only put people on the field that are fit.”

This is a quick and young Burren team but with experience throughout the pitch with former Down captain Kevin McKernan playing in full-back and Connial McGovern helping out around the middle. A fit again Ryan Treanor, Ronan McGrath and Cathal Foy are massive players for this Burren team and if they can help out Kerr and Poland with scores then the St Mary’s men will be hard to live with.

There was no games in Pairc Esler over the past two Sunday’s with the All-Ireland Hurling Final and the visit of the Pope but even though Down camogs are in an All-Ireland Final in Croke Park at 2pm on Sunday, this game isn’t expected to be moved.

Not for the first time this Championship Warrenpoint and Loughinisland have the long wait over the weekend as they complete the last of the four quarter-finals in Kilcoo on Monday evening.

Both sides are considered dark horses to make headway but the winners between the two will be propelled into the semi-final spotlight.

Loughinisland are top of Division Two, while CPN a sitting in the leading position in the Down All-County League Division One, but that will mean little on Monday.

Warrenpoint haven’t clicked but have done enough to have gone unbeaten and that should give them the edge. Jamie Grant and John Boyle are two powerhouses and their runs through the middle of teams have helped drag the Point over the line thus far, but they will need to use the wings and utilise the scoring prowess of Ross McGarry and Donagh McAleenan if not to get bogged down in a ruck.

Dan Gordon is playing brilliant stuff at centre-half back for Loughinisland and they will fancy their chances. Whether it's Super Blues or the Blue Wave in the semi-final, this should be an interesting clash.