LEGEND LINDEN POINTS TOWARDS CALLING IT A DAY 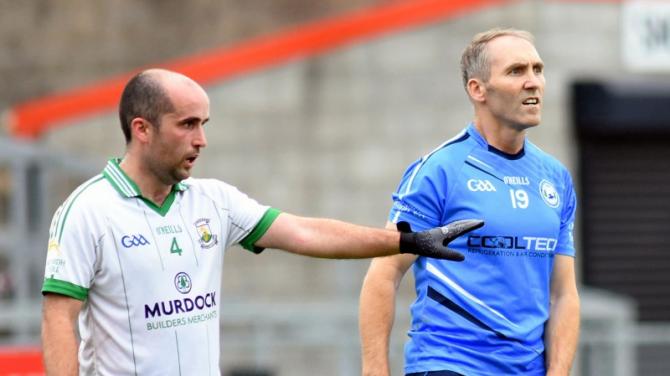 AFTER two All-Irelands, three Ulster titles and a National Football League title, Down legend Mickey Linden might – just might – be about to call it a day at the age of 55.

The legendary Linden came on for Mayobridge Thirds in their Down Reserve Championship Final against Burren at Pairc Esler on Saturday and scored a cracking point.

The Democrat caught up with the former Down great and asked him about that game. He said: “I really only came on for the last few minutes.

“We had a man sent off at the end of the first half and the boys, including Benny Coulter who did brilliantly in midfield for us, did all the hard work.

On how he felt at 55, Mickey said: “I have never really stopped training. I feel reasonably fit and try to keep myself in shape with Boot Camp and some yoga.

“Those things help to keep me supple and I do a good warm-up before I come on. And I still have a wee bit of speed.

“However, when I came on it was just a cameo role. But it was nice to get the score.”

When asked if would he continue to play next season Mickey answered. “I don’t know. I think it wasn’t a bad point but that might be the end for me. It’s a good way to go out.”

Linden, who was the 1994 Footballer of the year, was renowned for his speed and skills as a corner forward.

Despite playing with only 14 men for 35 minutes of their game, Mayobridge Thirds proved too strong for neighbours Burren. Barry Cunningham blasted to the net in the opening minute and this helped the Sky Blues to lead 1-4 to 0-4 at the break.

The Bridge went on a scoring spree early in the second half hitting seven unanswered points and although Burren tried manfully to get back in the game, they were continually thwarted by a strong Sky Blue defence.

The highlight of the second half was the final point of the game by a young Linden, who fired over from 45 metres, an effort which raised the biggest cheer of the night.