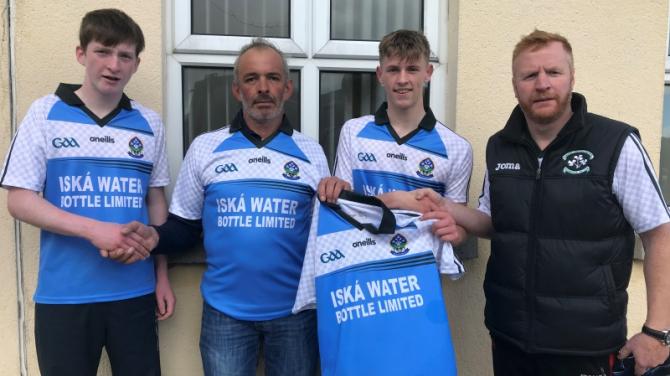 A goal by James Duggan four minutes into injury time gave the Warrenpoint and Shamrock hurlers a very unique League and Championship double.

Played in sunny, yet blustery conditions this was a game that could so easily have seen St Patrick's gain sweet revenge over their conquerors after two previous league meeting had seen them loose out by just a few points earlier in the season.

Niall Husarz opened the scoring for St Pat's after a strong run from 40-metre out saw him cut in from the side-line and drive the sliotar over the crossbar. A James Duggan free, 50-metres out levelled the game and a second free a minute later went all the way to the net, as Rankins went three points clear.

Che Donnelly, Imran Hussain and pointed free from Matthew Malone saw St Pat’s narrow the margin to just a point, before Duggan rounded his marker and from the narrowest of angles drove the sliotar to the roof of the net. A point from play and a third Duggan goal, when he rounded his marker and gave the St Pat's keeper no chance from close range meant that Rankins were now comfortably ahead by eight points with fifteen minutes left to play. Rory Og Mac Fhionnbhairr replied with a beauty all of fifty metres out on the wing for the reds fifth point before Aodhán Furlong did likewise for the Warrenpoint/Newry side.

It was then that Patrick Rankins almost hit the self-destruct button as St Pat’s dropped a man back in front of Duggan to cancel his threat on the edge of the square as a result, confusion reigned in the Rankins team as to what was happening and over the next seven minutes St Pats had managed to close the gap to just two points, as Hussain and Rory Og found the freedom to take their points. On the stroke of half time their fight back saw Rory Og slip past his marker and finish to the net, much the ecstatic joy of the many St Patricks supporters.

The pace and tempo of the second half saw both sides raise the bar with some excellent displays of blocking, hooking and high fielding of the sliotar under the extreme pressures that only a county final can bring. In the opening six minutes Patrick Rankins got the first three scores through Aodhán Furlong, Jack Houlihan and a James Duggan free.

This was to be the Newry/Warrenpoint sides last score for the next 15 minutes as St Pat’s had three Matthew Malone frees sail over the Rankins crossbar, along with another fine score from Hussain. With six minutes left of this thrilling encounter Hussain won an aerial battle for possession, took four steps towards the Rankins goal and from almost fifty metres out drove the sliotar deep in to the heart of the goalmouth, with hurls and bodies all tussling for possession the sliotar it managed to evade everyone and fly into the top corner of the net.

St Pat’s had managed to finally get their noses in front and were looking very strong to finally break the resolve of the Rankins teamwork.

Such was the tempo of the game that many players were starting to go down with cramp and exhaustion.

When Duggan knocked over the equaliser on the stroke of full time it look very likely that the result would have to be settled on another day, but Duggan once more proved to be a fantastic person to have in possession of the sliotar, with the game deep into injury time the ball was dropped out in front of him 30-metres out, he shifted two/three heavy tackles rounded a fourth and lashed the sliotar past a helpless keeper for the winner.