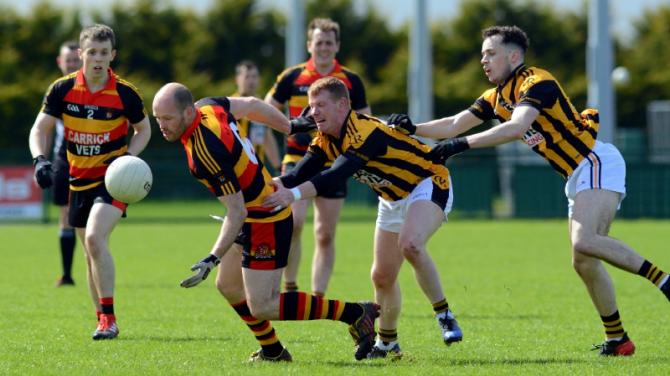 CROSSMAGLEN Rangers and Cullyhanna will collide on Saturday for a place in the Armagh Cormac Leonard Senior Club Championship Final.

It is the game many neutrals wanted to be the showcase final and it promises to a derby ding-dong.

The game takes place on Sunday (October 7) in Armagh’s Athletic Grounds at 5pm.

Cullyhanna have been knocking on the door in recent years and have come close to clinching their first ever Senior crown whereas Rangers are looking to get back onto the throne after been knocked off their perch in recent years with Maghery and Harps claiming the title.

Rangers were close to their brilliant best in patches in their emphatic semi-final victory over the Armagh city slickers but they still managed to concede 1-15 from a team that didn't play well.

That will be a point of concern for manager Donal Murtagh and his team but there were much more positives to take from that win.

His players rose to the challenge last weekend. They had a renewed hunger with players such as Johnny Hanratty, Mickey McNamee and Aaron Kernan putting in brilliant performances. Kyle Carragher was another who had a spark, while in defence young Alan Farrelly and Rico Kelly were immense.

Cullyhanna didn't pull up any trees in their win over Silverbridge because they didn't need to. They killed the Bridge off with little fuss and remained content enough to keep them at arms-length.

But they will be ready for Cross. A team they already beat in the Senior League, where unfortunately it was even more feisty in the stands than on the pitch.

Cullyhanna have been playing great football this season and young footballer Ross McQuillian has become a big player for them. Only last week he was named in the U20 All-Ireland Championship squad of the Year and Cross will have their work cut out to kerb the influence of the strong speedy runner.

Former Armagh captain Ciaran McKeever will no doubt take on one of Crossmaglen's danger men, while former county man Mickey Murray is back playing great stuff for Cullyhanna.

There will be so many battles all over the pitch and with so much at stake this could be an epic encounter.

Johnny Hanratty was immense against Harps, not just his physical battles, which he lavishes, but his range of passing kept Cross on the front foot, while Kyle Carragher or Mickey McNamee were more often than not on the receiving end.

Cullyhanna like to suck the defence out of position and then use the speed of McQuillan and Jason Duffy to burst through and exploit the space and players such as Aiden and Conor Nugent are deadly finishers.

Both teams play on the front foot with the heads looking up and are much less likely turn on their heels and play in circles along their own back-lines.

Young Rian O'Neill is a phenomenal athlete and footballer and promises much, but it is a game that will take place on Saturday that can make Rian a better player. He shouldn't be expected to be the finished article, even if he isn't too far away, but Cross need a huge performance on the big stage from the younger O'Neill brother and if he delivers then his team will be hard to stop.

It's possible these two will clash or Barry McConville might replace Mackin with Oisin O'Neill taking the marking duties on the Cullyhanna man, either way they are battles to get enthralled in as both players offer so much to their teams.

Carragher is a master at getting out in front and winning primary ball and he still has retained that spurt of speed he showed ten years ago. A tough player to mark when on song. But Irwin is a tidy and diligent defender that possesses a tremendous engine and he is no slouch either.

Both players were outstanding players at underage level and perhaps at different rates they have matured into fine senior footballers. Farrelly is a strong but agile defender. Even as a youngster he could read the game and the big lad will be tested by McQuillan.

He might need assistance from Rico Kelly, who was magnificent in defence against Harps. Quillan just keeps getting better with each game. Powerful and fast when he runs direct he is hard to stop and if he is on form then Cullyhanna have a great chance of succeeding.