McIver: 'Seven would be greatest ever achievement' 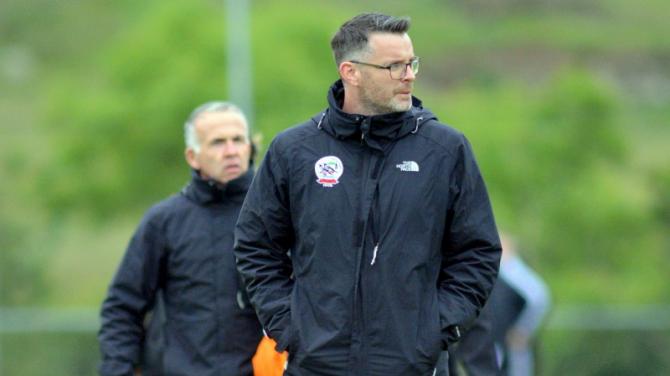 KILCOO manager Paul McIver insists that should his side win their seventh Down Senior Club Championship in a row that it would be the biggest achievement over that period.

The Magpies are going into the clash wounded with eight key players injured but Burren boss Steven McDonnell doesn't feel that will give his side much of an advantage.

“It is a massive opportunity that we have to embrace, and we have, and it is one of our biggest challenges made even bigger by the fact that we have so many players missing but we have worked really hard on getting a panel together in facing these challenges ahead,” said McIver.

“What other team than Kilcoo could do without the quality of players missing as us? Six players with county experience in recent years and yet we are still going as hard as ever and the belief in the group is nothing short of amazing.

“There is something special about the players, the group of players, the club, it is born out of sheer hard work.

“The effort that these boys have put in not only this year but the last ten years, from underage and onwards.

“You only have to go down to the club every night has see the work that Conor Laverty is doing at underage and what the committee have done to get a community centre. The work that groundsman Niall puts in to keep the pitch pristine.

“They put in their own gym, it is state of the art and they are in it every night. It is sheer hard work and that is them generally. Most of the players are labourers and they are up every morning from 6am they come home to football and train three or four evenings a week. They have great work ethic on the pitch and away from the pitch and that stands to them.

“They know that no matter who pulls on that jersey is that person will get 100 percent work-rate. They have a very special bond with each other and they know they are going forward to this challenge knowing that after what all they have come and they are so close to making history.

“Our players know that with so many players missing that this would be our greatest achievement.”

Burren's Steven McDonnell, who manages along with Paddy O'Rourke, feels that Kilcoo will be fit to adopt to the loss of personnel and feels that even the walking wounded Magpies will be able to pose a threat.

“Yes they have a long injury-list but like Burren they have a strong bench and injuries to key players don't hurt Kilcoo as it might do other teams,” said McDonnell.

“All you have to do is look how influential Darragh O'Hanlon was for them over recent years and they have had to do without him for most of this year and they are sitting in a good position in the League and have reached the County Final, without those players.

And the Killeavy man is hoping that the ruthless streak they showed in the second half against Mayobridge will be evident again on Sunday.

“One thing when you are playing the likes of Kilcoo, if you don't take your opportunities they will come back to haunt you. So we need to be clinical,” McDonnell said.

“If you compare our first half against Mayobridge to our second half there is no real comparison.

“We showed our killer instinct in the second half, particular for ten or 15 minutes to kill off the game.

“We won't get those number of chances in the final, they will be limited so it is vital that we take whatever chances we get.

“The talent of the young players in Burren is phenomenal and those young boys have reenergised this team this year.

“They have come in on the back of winning a county Minor title last year and have proved that they are capable and good enough to be in the starting 15.

“As a management team we are not afraid to throw them in because those young lads don't hold any fear and they have the mindset of winners. We have to be happy with the squad overall.

“Eamon Toner came on and made an immediate impact and Donal O'Hare got another 55 minutes under his belt.”

And particularly in the second half they looked sharp and they are crucial to Burren.

“During the course of the League and much of the Championship we have had to do without them and did well without them,” added McDonnell. “It is probably a good place to be in and from a management point of view it is reassuring to know that the bench can do the job.”

Both management teams feel the game will go down to the wire. Burren's killer instinct kicked in against Mayobridge and they displayed the mental toughness they may have been guilty of not having last season. But that will be tested on Sunday.

Should Kilcoo win, they'll rightly secure their place in history and if Burren deliver it will be a massive achievement also.

It is a game not to be missed.

The Down Morgan Fuels Senior Club Championship Final takes place in Newry's Pairc Esler on Sunday (October 14) at 4pm with a cracker also expected in the Minor Final between Burren and Ballyholland Harps at 2pm.