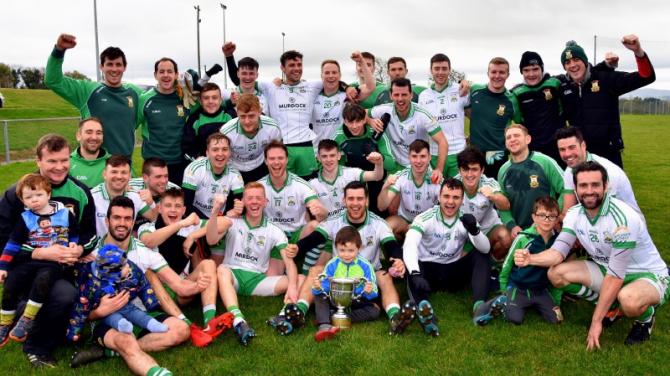 BURREN’S Eamon Toner was delighted after his side completed the Down Championship and League double for the first time since 1996 on Saturday after defeating the already relegated Saval.

“It hasn’t been done since 1996 and while some of us won the League in 2012, winning the double is very special to this group of players anyway,” said Toner.

“We have worked hard from the start of the year and we have got the reward at the end.

“We will enjoy tonight, because League titles don’t come easy and then we will get our heads down and prepare for Ulster

“After we won the Championship we were on a high but we had a job to do and a League to win and this was our priority after winning the Championship. Only now can we look to Ulster and we have two weeks to prepare.”

The Senior Club Champions were ahead by only three points with 15 minutes left, and in that time they romped over the line outscoring their opponents 2-05 to a single point.

Burren rested most of the team that played in the final six days earlier but captain Cathal Foy replied with a goal a minute later. The St Mary’s men led 1-08 to 1-03 at the break but Saval could have got more from the game had Madine’s penalty not been poorly executed and he had another shot that somehow stayed out when it struck the inside of the post.

But Devlin’s goal on 45 minutes left three between the teams and a hint of an upset on the cards, however on came the big guns of Donal O’Hare and Kevin McKernan. Another key player Eamonn Toner rattled the net, O’Hare weighed in with three points and substitute Conor Cox completed the convincing finish with a fine goal.

Down County chairman Sean Rooney presented the Division One Cup to captain Cathal Foy, who was grateful to lift his second piece of silverware in less than a week.

“Leagues are not easy won and we thought we were in a relegation play-off at one stage earlier in the year but we battled away and went to Hilltown one night with 18 men and we got over the line and it is all those kind of results that you get and a few other results went our way too, so I am happy enough to lift this League trophy and we will enjoy tonight,” said Foy.

“I would just like to thank Saval for showing up. I know it is no easy thing fulfilling League fixtures after being put out of the Championship but we have been there year after year and have always fulfilled our fixtures.

“The Co Board work the best they can and sometimes clubs aren’t the easiest to work with and I would like to thank the Co Board, the referee’s and all the linesmen, umpires and those around the clubs who do their bit week in week out to ensure the games go ahead.”