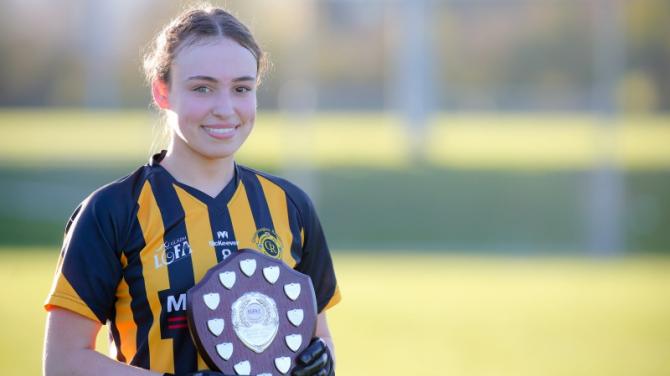 CROSSMAGLEN crushed Granemore to clinch the Armagh Minor B Championship with a comprehensive victory in Sunday’s final at Carrickcruppen, writes Richard Bullick.

Captained by All-Ireland U18 boxing champion Shauna O’Callaghan, Crossmaglen certainly packed a punch in this final, establishing a comfortable lead by half-time and never looking back in the course of an excellent team performance in perfect conditions.

Last season, Crossmaglen’s adult team had overcome the more fancied Dromintee and Sarsfields to win the Intermediate title and now their Minors have followed suit under the same management, the impressive pairing of Peter McMahon and Maria O’Donnell.

They may have been seen as favourites for the final after overcoming Carrickcruppen 3-10 to 2-7 in the semis, but took nothing for granted against Granemore and were rewarded with an emphatic win.

As would be expected, the meticulous Cross bosses had done their homework and assigned Faye Fitzpatrick the task of picking up Granemore’s dual star Corinna Doyle, who had hit a hat-trick in a school camogie final for St Pat’s Keady during the week.

Fitzpatrick’s height and pace enabled her to shackle Doyle effectively, all the more so when the latter was moved further out the field in the second half, and her impressive marking job negated Granemore’s main threat.

Granemore had booked their place in the decider by beating Dromintee with Aoibheann McClelland dominating midfield but for the final she was switched to corner back to mark the dangerous Alex Clarke, sister of Armagh star Jamie, and had her afternoon cut short by injury.

Ballymacnab camog Ellie McKee, who plays her club football for Granemore, was an influential figure early on in claiming her own team’s kickouts and orchestrating attacks from centre half back but Cross switched Sarah Hanratty, who was excellent throughout, from midfield to counter that.

Skipper O’Callaghan got through a mountain of work in Crossmaglen’s midfield and her forwards increasingly came into the game, with Caitlin Lenaghan and Melissa Hughes linking well, leading to two goals for the latter.

The diminutive Clarke raised white and green flags while wing forward Caoimhe Dooley also got herself on the scoresheet as Crossmaglen led by 13 at the interval on a scoreline of 3-7 to 0-3.

Granemore needed to launch a concerted comeback at the start of the second half but instead Crossmaglen got going again with early scores from Clarke, centre half forward Caoimhin O’Neill and Hughes.

The contest was effectively finished but the crowd were well entertained by Crossmaglen’s movement and slick support play with O’Callaghan surging forward from midfield, Clarke a constant menace to the Granemore rearguard with her penetrating runs and Hughes dominant inside.

O’Neill helped herself to a further 1-3 while Granemore got no joy at the other end where the Crossmaglen senior side’s centre half back Aislinn McMahon showed typical composure in soaking up their attempted attacks.

The Crossmaglen subs made hay too, Caitlyn McCoy scoring a goal and Kellie Shields hitting three points in the last quarter while Clarke ended up with a hat-trick of majors but it was Eimear McMahon, at the tender age of just 13, who upstaged everyone else for the Player of the Match award.

Effective further back in the first half, Eimear McMahon moved to her regular role of half forward for the last quarter and constantly picked out her attacking colleagues with pinpoint passes while McConville also delivered intelligent balls forward.

This win was the perfect finish to the year for Crossmaglen Minors and another trophy triumph for some incredibly busy players in this side who have been doubling up at adult level for their club, winning with their school and representing their county at age group level.