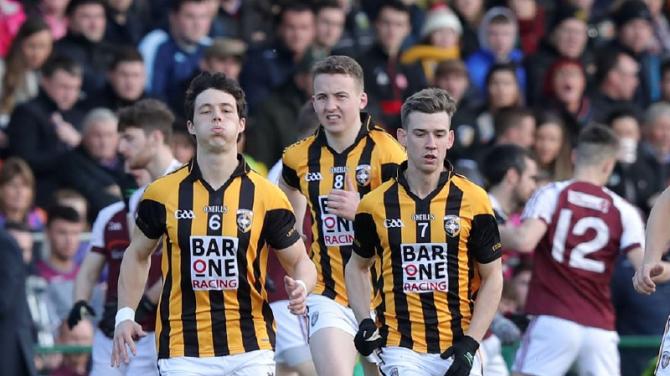 CROSSMAGLEN Rangers will face their toughest battle in the last three years when they take on Donegal’s Gweedore on Sunday.

Omagh will host both semi-finals, Eoghan Rua v Scotstown at 1.30pm, followed by Gweedore v Crossmaglen Rangers at 3.30pm, which could be a gamble given how prone the pitch is to flooding.

However, should Healy Park be deemed unplayable, then Crossmaglen will play Gweedore in Brewster Park, Enniskillen, and regardless where the games take place, there should be two epic battles.

Rangers left themselves with a lot of room to improve after they ground out the win over Coalisland.

The south Armagh men weren’t firing on all cylinders but importantly they came good when it really mattered as the game opened up thanks it finishing with 13 players each.

Gweedore and Scotstown were joint favourites to lift the title before the Ulster Championship began and there is little to suggest that has changed.

The Donegal men have several outstanding players such as Odran MacNiallais, Kevin Cassidy, Cian Mulligan and Michael Carroll and there is no doubt that Cross manager Donal Murtagh will have a plan to try and limit the influence of these players.

And Cross legend Oisin McConville feels that should Rangers keep Gweedore’s key men quiet then the south Armagh side should possesses enough talent to see them progress.

“The match ups for Cross are crucial,” said McConville.

“If you were to think that those players don't play up to scratch then those of us in Cross will feel it is a game that we should be winning.

“If we can nullify them, then it is up to us to take care of the game. I am sure Gweedore are looking at us too and will be thinking if they can nullify Kyle Carragher, Oisin and Rian O'Neill that they will have great chance. But I think that is a big ask given how those boys are playing.”

Donegal star MacNiallais is an injury concern and should he miss the game it would be a massive blow to the Donegal men.

It has the potential to be a brilliant shoot-out between two attacking teams. Conditions in November rarely provide the platform for all out attacking free-flowing football and again Rangers will need to dig deep.

James Morgan has been immense this season and may be given the role to keep an eye on former Donegal star Kevin Cassidy.

Cassidy is a quality footballer who likes to run with possession but he also brings his team-mates into the game and he can be a deadly finisher.

Morgan though is a talented defender, strong and fast and an accurate tackler and he has the ability to blunt the sharp attack that Cassidy can provide.

Paul Hughes is another defender that has impressed since returning from a long injury lay-off. He has often been the defender that has won the ball in his own corner of the pitch to start an attack and also finish in the goalmouth.

Rico Kelly has been exceptional this year too. A player capable of leading the midfield, he has adapted to becoming a great aggressive defender who plays on the front foot, he likes to get in front of his man but Kelly also possesses a terrific reach for making that last ditch block or pop-tackle.

In midfield Stephen Morris has stepped up over the past two seasons. As a youngster he was earmarked for a great footballing career and in Crossmaglen, perhaps more so than other clubs, young players are expected to adapt to the rigours of senior football almost immediately.

Morris is continually improving and we have yet to see the best of him, but he is a strong athlete, good in the air and a threat in attack too and if the young footballer can deliver a performance he is capable of then Rangers will have a great chance.

Oisin O’Neill, Rian O’Neill and 18-year-old Cian McConville are exciting footballers and Gweedore will have a plan to try and contain them, which is easier said than done. This will be their biggest test of their playing careers so far and they’ll have plenty more ahead. But for Mickey McNamee, Johnny Hanratty and Kyle Carragher they are seasoned warriors and accomplished footballers. They will be expected to bring the contest to Gweedore.

McNamee and Carragher will flourish in an open game but they are hungry attackers that love the dirty ball that Ulster football usually brings too.

Tony Kernan’s return from injury against Coalisland is also a huge boost to Rangers. He offers a cool head and sure feet and like his brother Aaron, Tony leads by his actions and will give the Rangers attack another outlet.

Captain Aaron Kernan has been exceptional this season and looks a renewed player. The two years without a trophy stoked an appreciation for his craft and that is true of the entire squad.

The performance against Coalisland will not be anywhere near good enough to get past Gweedore. Cross won’t be able to click all the time and dominate the entire contest but they have the players capable of winning their own battles and importantly a deadly forward line that can deliver when under pressure.

Gweedore are used to taking a huge leads in games whereas Rangers have been forced to come from behind to win games in recent months, which gives both sides huge belief going into the final ten minutes. As long as no-team runs away with it, it is set to be a cracking contest and a game not to be missed.

3.30pm at Healy Park Omagh (if pitch isn't fit for purpose, then it'll be moved to Brewster Park Enniskillen).