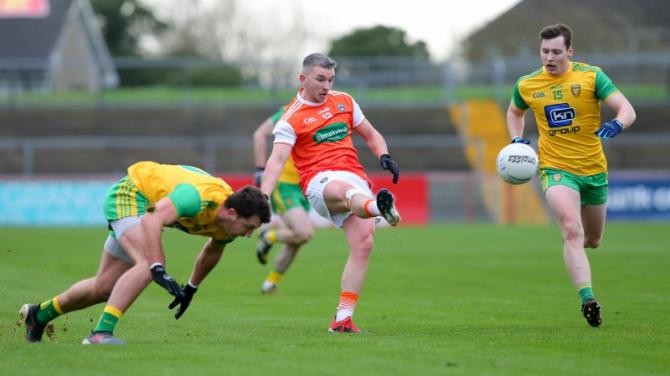 ARMAGH manager Kieran McGeeney insists that giving players game-time will play a part in his thinking when this side face rivals Tyrone in the Dr McKenna Cup Final on Saturday (January 19), in the Athletic Grounds at 7.30pm.

Armagh put Monaghan to the sword on Wednesday night and then overcame Donegal in Healy Park on Sunday.

Captain Rory Grugan started and finished the scoring in a tight contest, where neither side were capable of running away with the win and where Drumgath referee Paul Faloon allowed the game to be played hard and fair.

Last season a reasonably untested Armagh side fell against Donegal at the same hurdle but took moral comfort from a decent display and they carried that confidence through to the National League.

And having gone one better on Sunday, the Armagh boss hopes his side will be raring to go when they face Kildare in their first game of Division Two of the Allianz National League.

“When you are there, I suppose you want to win it, but the big thing for us is giving players game-time,” said McGeeney.

“The Kildare game is an important game for us, as it is for them, and we want to get off to a good start against what is a top-eight team.

“It is more about trying to get better at what we are doing. I know it is cliché but it is true.”

Played in a wet and wild windy Healy Park on Sunday, Rory Grugan gave the Orchard side and early lead with a 21-metre close-range converted free but Donegal’s big Michael Langan levelled with a super long-range point.

Donegal had a huge wind at their backs and they took control for much of the opening quarter with the nippy Jamie Brennan converting a free and then he fired over another from play.

Armagh had chances but they broke down with wides, or players slipping on the wet surface, or kicking too high. Ciaran Thompson gave Donegal a 0-04 to 0-01 lead before Forkhill’s Jemar Hall sparked the comeback with a fine point.

A minute later and Niall Grimley slotted over to finish off a great move started deep by the creative Jamie Clarke and that involved Hall and Stefan Campbell.

Campbell then grabbed the equalising point with the outside of his foot and it was a score that the build-up deserved-as Armagh had over 11 passes before the Lurgan lad squared matters up.

But Donegal were back in front less than a minute later when 6-footer Jason McGee punched home after Caolan McGonigle had cut inside and raced down the game-line.

Armagh hit back with points from Grimley and Grugan but Rian O'Neill slipped a beauty between the posts after an intelligent set-piece between Grugan and Stefan Campbell to level the score after 29 entertaining minutes.

Donegal's key man Jamie Brennan and Campbell traded points before Grimley's converted free gave the Orchard lads a 0-09 to 1-05 lead at the break.

The sides were level on four separate occasions during the second half as the game seemed to be tottering towards extra-time.

Donegal's Langan, McGonigle, big McGee and Brennan all found the target but Armagh had the creativity and legs to counter-attack.

Campbell stepped up to score, Grimley steadied the ship and Sheridan steered over a great point after galloping through the middle, he thought of passing to team-mate Clarke before opting to strike and it was true and over.

Both sides missed chances to grab a winner before Grugan got the all important winner on 68 minutes.

The Orchard boss wasn't getting carried away with the win as he acknowledged tougher tests await but he believes his side are getting the games that should help them improve.

“We understand that Donegal and Monaghan were understrength and they were probably looking to learn more from that game than we were, in terms of the League,” McGeeney said.

“But is still good for us to have a game next week and see where we are and give people game-time.

“We would always have the same policy that if you are playing well in training you will get picked, whether that is McKenna Cup, League or Championship, and we try to stick to it.

You could pick up injuries and that would be the only fear. We know we are playing catch up and we are not trying to kid ourselves and but we will be playing against some well-conditioned teams and... it will give us a better measure of where we are and we will hope we don’t lose anyone in the process.”