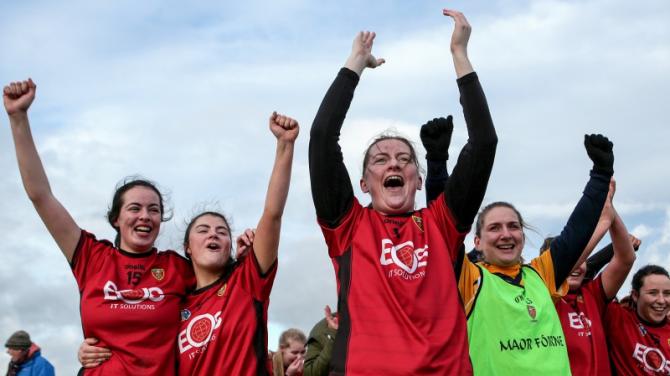 CLONDUFF Senior camogs are one game way from winning an Intermediate All-Ireland after Sunday's thrilling win over Galway's Craughwell.

It was a long journey to Kinnegad in Co Westmeath on Sunday morning for the players and their hundreds of supporters but it was much shorter on the way home.

It was a bitterly cold day but not on the pitch! Both teams have similar colours and played in their respective County colours. Clonduff opted to play against the strong breeze in the first half and this is where they laid the foundations for victory.

The work-rate from both teams was tremendous with no quarter given nor taken. Craughwell (Galway and Connaught Champions) moved into a two point lead just before the break and whilst they got the first opportunity of the second half they were again thwarted by a strong Clonduff defence. Clonduff went on to score 1-2 without reply.

The goal came from a long range free by Paula O’Hagan which was batted down by a Craughwell defender right into the path of Sara Louise who volleyed it to the back of the net. The lead was cut to a point at one stage but Orla Gribben fired over an over-shoulder point when she had her back to the goal.

Two points is a dangerous lead and the Westerners gained a lot of possession in the final ten minutes intent on that all-important goal but they failed to make any inroads on a very strong defensive line led by that stalwart Fionnuala Carr.

Of course, the huge Clonduff support was like an extra player on the field. The joy and relief among both players and supporters knew no bounds and it took some time for them to head for home where the team received a tremendous reception in The Downshire Arms, Hilltown.

The reward for winning the semi-final is a date in Croke Park on Sunday, March 3, to face the Waterford and Munster Champions Gailltir for the ultimate honour.