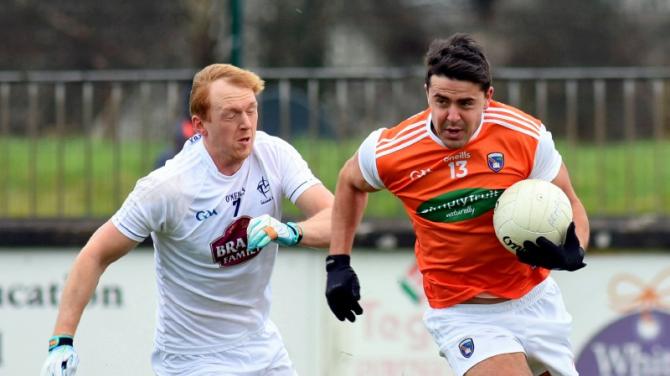 IT was a game where Armagh could have been out of sight in the first ten minutes, as the Orchard side threw everything at Kildare, but with ten minutes gone only scored two points.

That was a sign of what was to come as Armagh played some fantastic football but the swirling wind and some poor decision making proved costly as young Jimmy Higgins secured a draw for Kildare with virtually the last kick of the game.

It isn't a bad point to come away with, especially considering Kildare were in Division One last year but the overall feeling was that this is a victory Armagh allowed to slip through their fingers.

“We probably would feel we left it behind us. We missed a lot of easy scores and especially near the end there like they were dropping balls short.

“Fair play to Kildare, they came back, they kept ticking away. We didn’t help matters by giving the ball away very easily at times, not even under pressure but that sometimes too.”

Conor Hartly gave Kildare the lead but young Jarly Og Burns, making his National League debut, stroked his shot between the posts. Grugan then played a lovely long-range looping pass into Jamie Clarke and he kicked has he turned for a cracking point.

A minute later Clarke was involved as young Shane's lad Connaire Mackin raised towards goal and let fly from 20-metres, it looked a certain goal but it struck the underside of the bar and stayed out.

Campbell, Forker and Clarke all kicked wide as the Orchard fans thought it was going to be one of those days but then Campbell restored the faith with a simple point after Mackin's midfield mark.

Armagh continued to drop shots short and kick wide, seven in the first half, and this allowed Kildare back in. Higgins converted his first free on 16 minutes and Eoin Doyle fisted over when he may have opted for goal. But Armagh's Grugan and Niall Grimley floated over some beauties.

James Morgan had Kildare's Ben McCormack wrapped up early on but as the game progressed the Kildare forward won a couple of duals before Morgan finished the game on top again.

Kildare actually took the lead heading into the break but Clarke's point tied the sides at 0-06 each at half-time.

Adam Tyrrell bagged his second point to put the Lillywhites ahead again but a brace of points within a minute from Grugan and the hard working Jemar Hall put Armagh back in front.

There was a great atmosphere in St Conleth's Park as both sets of supporters were in full voice despite the bitter cold.

Clarke tagged on a point before Grugan's insightful pass left Campbell with only defender David Hyland to beat and he skipped past with ease before lashing confidently into the net. The Armagh cheers hadn't time to die down by the time Grimley converted from 14-metres and with 50 minutes played the Orchard team led by five points.

But crucially they only managed one more point in the remaining 25 minutes, including additional time.

And it wasn't because Kildare had Armagh pinned back, it was more a case of the Orchard side not taking their chances. Indeed Joe McElroy had a chance to score, he opted to shoot low but his shot flashed narrowly wide.

The Lilywhites kept chipping away and over the next ten minutes had cut the gap to only two points. Young Aaron Masterson fired over from distance to leave a point between the teams and then with 70 minutes played Higgins levelled the score.

It took Joe McIlroy's goal to spark a revival win over Clare last season and Armagh will have another tough battle in Newry on Sunday. But they can take plenty of positives from Sunday's display and a win over Clare would be the perfect tonic to what was difficult to swallow at the weekend.