Great first year for the Down Masters 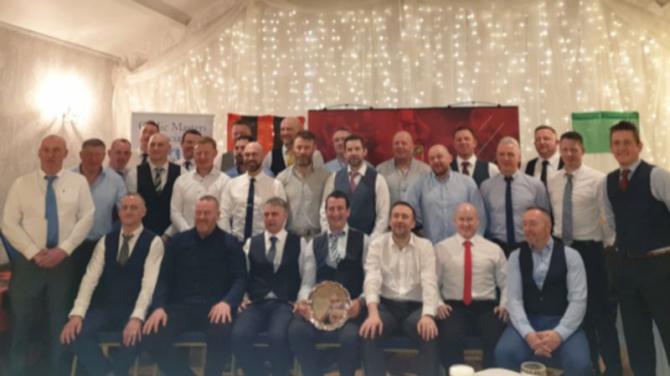 THE Down Masters side held their annual awards presentation evening in the Downshire Hotel, Hilltown, on Saturday night.

Micky Linden was the guest speaker and gave out the medals. Never to miss a chance to recruit young talent, the Down Masters  Chairman Darragh McGreevy presented Micky with a new pair of boots and let him know that number 13 is ready for him.

Down Masters was formed at the start of last year and have a total squad of over 30 with a mixture of ages over 40 and abilities.

Many of the players are still playing for their clubs at some level, while others thought their playing days were over.

Since they were set up, Down Masters have had huge support from GAA people and clubs.

Last year Down had wins against Leitrim/Longford, Monaghan and Antrim, with losses against Cavan, Donegal and Tyrone.

Going into the last match against Tyrone we were only a point behind them and their win brought them up to the Trophy Competition.

It was a bit disappointing for Down to drop down to the Plate Competition but to win it in their first year was a big achievement. It took a reply to overcome Clare in the semi final and then it was a convincing win over Kildare in the final.