Jamie is ready for Hollywood 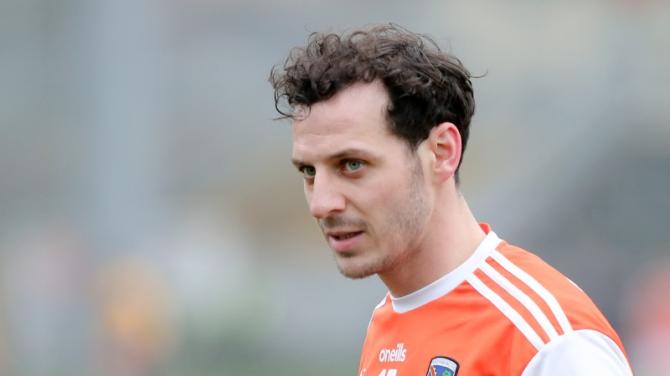 SUNDAY’S Ulster Championship clash will be a game both management teams will want to get their match-ups right.

While Down is much changed to the one that beat their rivals two years ago the key battles are likely to be similar and it will be interesting to see who has improved or not since then.

Down captain Darren O’Hagan marked Armagh’s exciting talisman Jamie Clarke with both players giving fine displays, but it was the Mourne man that won many of the post-match plaudits.

The no-nonsense, tough tackling O’Hagan, dismisses the praise he received in 2017 but he is looking forward to renewing old acquaintances

“It is always a tough game, that is one thing I can be sure of,” said O’Hagan.

“The last time we played in Newry I marked Jamie [Clarke]. That was really tough and people say I kept him quiet because Down got the victory but if Armagh had won that game by a point then everyone would have been praising Jamie.

“I made a couple of good tackles while he made some great moves and set up the goal. Jamie is one of those players who you can’t take your eye off for one minute and it’s not easy doing that for 70 minutes. I don’t know who will be picking him up this year or where he will be playing in the Armagh team.”

Having played for New York last season, Clarke’s return has been a boost to the Armagh squad and while he hasn’t been playing close to goal, he has been the main provider of scores during the Dr McKenna Cup and National Football League.

While most players got over injuries or returned to their clubs for the start of the domestic season, Clarke is not in the Crossmaglen Rangers panel and he has not featured in any club games and Dennis Hollywood, who is on the Armagh management panel, feels Jamie’s lack of game-time won’t be an issue on Sunday. He praised his contribution and change of style this year.

“I don’t think it is [a disadvantage],” said Hollywood.

“Jamie is who he is and that is the way it is. He works harder than anybody else and he has definitely bought into what we are trying to do. Jamie will be in for selection on May 19.

“I don’t think it is something we have worked on but it is something that Jamie has maybe started to learn about his own play. It is important to bring other players into the game because obviously he is a marked man and he will be tagged.

“Not only will he have a man marking him but he will likely have a player in front of him so we are going to be faced with that against Down. I’d say there will be very little space in our forward lines and we will have to cope with that.”

Down boss Paddy Tally has a different approach and he insists that not only should his players’ line out for the clubs but that they should be head and shoulders above the other players on the pitch.

“One of the things that I would be expecting and something that I be demanding that when they go back to their clubs, is that they are the best players on the pitch,” said Tally.

And the Down system is different to Armagh’s - the Mourne county'a domestic club season started in April and will end in October, with the Club Championships being played in-between, while in Armagh the All-County Leagues will be wrapped up in July and then the Club Championships start in August and are wrapped up by the end of September. And Tally wants his players playing club football, because he believes it will make them better footballers.

“I am a big believer in playing matches,” said Tally.

“If you are a player and you want to improve your skill-set or get better then you have to be playing matches to keep improving.

“In training we can create situations all day long but ultimately where you improve is when you are playing games and when you are pitched against people that are out to beat you and there is a competitive element in your match.

And his captain O’Hagan agrees with his manager.

“Playing club football is something that I really do like about the Down set-up,” said O’Hagan.

“When the National League is finished we always get to play about six or six games with our clubs before going back to prepare for the Championship.

“It is very important that every county does the same because it is what every player wants to do and you can train as much as you want but after all, the reason you train is to play football and it is great.

“I can’t say that we will be going in any sharper than Armagh [because of playing more club games] because you are playing at club standard and there is a massive difference going into the county level. I am sure that they will be coming to Newry as sharp as we will be.”