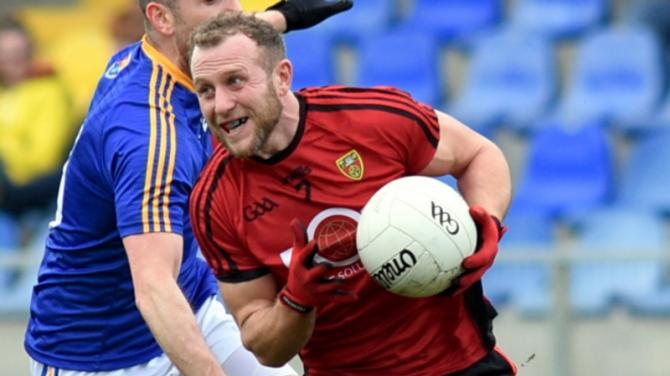 DOWN captain Darren O'Hagan has hailed the character of his young squad and feels that the never-say-die attitude they displayed during the National League will stand to them on Sunday.

Late, late wins against Westmeath and Sligo turned what could have been a harsh season in Division Three to one of relative success, which is a fine achievement, especially given manager Paddy Tally gave 15 players their debuts.

“During the League it was backs against the wall sort of stuff and we pulled through, even against Westmeath when we went down to 14 men, we stuck at it and won by a point in bad conditions and the team as built on that performance,” said O'Hagan.

“We know to keep going and to keep working away during matches. Hopefully it will come to us in the end. And yes we want to bring that character into the Championship.

“One thing that I have been delighted with this year, in previous years we would have lost those games by a point, but we have a wee bit of character this year, which Paddy [Tally] has brought and we were able to see those games out in a tight finish.”

It is 25 years since Down last won an Ulster title, long before their was the backdoor system and light-years ahead of the conception of the Super 8. For O'Hagan, he is content with going through the front door by beating Armagh in the first round.

“The first goal for anyone is the Ulster Championship and I have played in two Ulster Finals and we have got heavily beaten in the two of them unfortunately,” said O'Hagan.

“Hopefully we can get there soon.

“Yes there are people throughout the county who want and expect Down to be winning Ulster titles and All-Ireland’s but football has changed and different teams are taking their turn. With Paddy coming in, he is building a new team towards competing for an Ulster Championship.”

And O'Hagan has welcomed the influx of youth into the squad even it makes him one of the senior members of the panel.

“It is important that you blood a couple of players every year. Whether it be League appearances or Dr McKenna Cup or Championship, you have to keep freshening the team up and keep giving the younger lads that chance and that hunger and that want to play for Down,” said O'Hagan.

“There have been 15 new players that Paddy has introduced in training and challenge games and he is turning them into county players already and they really, really want to pull on that Down jersey.

“There has been a new lease of life with a lot of the young fellas coming in this year in training and in the changing room, it is a bit of craic and I think that is very important to keep things fresh.”

Throw-in for the Senior Ulster Championship in Newry’s Pairc Esler on Sunday (May 19) is at 4pm and tickets are available from clubs in Armagh and Down as well as SuperValu on Hill Street, beside the Newry Democrat newspaper office.