Future bright as Down Minors crash out 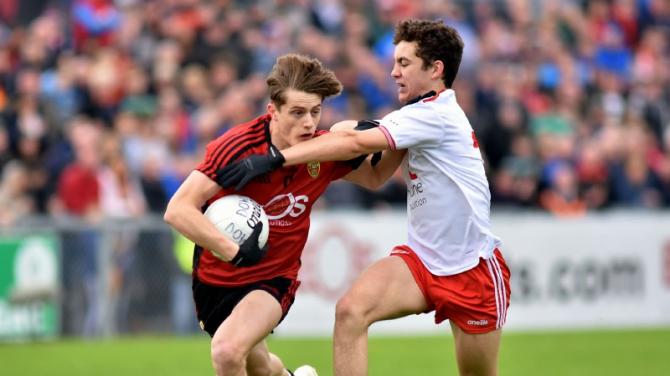 DOWN exited the Electric Ireland Minor Ulster Championship to a strong Tyrone side but for long spells at a packed Pairc Esler it seemed the Mourne youngsters would spring a surprise on many people’s favourites for the title.

Mourne Minor manager James McCartan was disappointed with the defeat but feels that his U17 squad will play its part in providing top talent for Down's future.

“I do believe there are boys in the red and black that will represent Down at Senior level but we don't have the conveyor belt which Tyrone and Donegal seem to have,” said McCartan.

“It is what it is and we are trying to work with what we have and there are talented boys in that dressing room and I would like to think that we will see them later on.”

With 45 minutes played Down led by three points. However, in the last quarter the

young Red Hands piled on the pressure and in the end were worth their five-point victory.

It was tit-for-tat for most of the first half. Tyrone drew first blood in the opening minute when the accurate Mark Devlin knocked over a free. But back came the men from the Mournes and were unlucky not to net when John McGovern, through on goal, brought a stunning block from the visiting keeper Fintan Coney.

At the other end it was the same story, with the Down keeper Aodhan Furlong brilliantly saving from Shea Quinn. The Down keeper was to make two other fine saves in the opening half – from Michael McGleenan and from Conor Cuddy, which pleased the Minor manager.

“Our goalkeeper was excellent today, he is there to save us and he saved us three times in the first half and then came off his line a few times in the second,” said McCartan.

Meanwhile the home team levelled on seven minutes, Odhran Murdock pointing from a 35-yard free. And a minute later McGovern set up a scoring opportunity for Ryan Magill who confidently knocked over the bar.

On 15 minutes Daly pointed from a dead ball to level matters. Devlin added another free-kick to the scoreboard on 16 minutes but St Colman’s full forward Adam Crimmins once more equalised when he cut inside a Tyrone defender before pointing with a super effort from 30-yards.

It was three-apiece on 17 minutes and four-apiece two minutes later, Devlin pointing with his fourth free and Down’s Cian McLoughlin scoring at the other end with a great right-footed drive.

The home team then eased into a three-point advantage, McLoughlin grabbing his second score of the day while Sean Og McCusker pointed from a free with Odhran Murdock doing likewise from play.

Still Tyrone went in at the break two points in arrears, Devlin pointing with his sixth free and Shea Brown scoring the first Red Hand point from play. Oran Cunningham replied at the other end.

The visitors came out after the break and levelled when Shea Daly and Daniel Fullerton each pointed.

However, on 40 minutes the skilful John McGovern bustled his way through a packed Tyrone defence before slamming into the Red Hands’ net from 10 yards. And although Fullerton pointed from play for Tyrone, Adam Finnegan hit a cracking point from way out on the right to restore Down’s three-point advantage.

However, that Crimmins’ point was in fact’s Down’s last throw of the dice with Tyrone scoring 1-06 in the last 15 minutes to Down’s meagre one-point reply, which disappointed the Down boss.

“Probably an old trait came back to haunt us to keep the scoreboard ticking over and we seem to get to 1-10 to 1-11 but we need to be getting to 1-14 or 1-15 to win games. But full credit to Tyrone, they came back,” said McCartan.

“We got back in position with a goal but we needed to follow that up with some more points but we didn't.

“I can't fault the guys for effort and by and large I was pleased enough with the performance but after the goal or scores were few and far between unfortunately.”

Those Red Hand points came from Daniel Fullerton (three), Mark Devlin (two) and Luke Donnelly. And the Tyrone goal came on 51 minutes when Devlin got on the end of Michael McGleenan’s great ball and cynically blasted past Aodhan Furlong.

In the last five minutes referee James Lewis flashed a second yellow card to Tyrone’s Mark Devlin for a high tackle but just two minutes later Down man Sean Og McClusker followed him to the line following an off-the-ball incident with Shea Daly, who received a black card.

Oisin Savage was Down’s only scorer in the last quarter, the substitute pointing from a free-kick in injury time.

It wasn't to be Down's day and the Minor boss feels the two teams that his side lost to in the Championship can make headway.

“Tyrone are a quality outfit, obviously they got caught last week, Monaghan and Tyrone are good teams and it will be interesting to watch just how far they go in the Championship.”