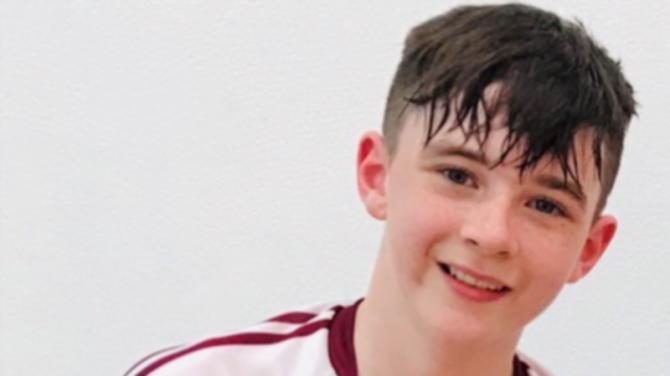 Played in the Eugene Quinn club, Armagh on Saturday, ÓDúill blasted to a 15-3 15-0 victory in round 16 against Darragh Nixon of Tyrone.

He then faced Connor Hession of Galway in the quarter-final. The South Armagh player had taken game one 15-10 and at 14-10 up in the second, it looked like a two game victory.

However, a shoulder injury occurred and the Tribesman took every opportunity, forcing a deciding tie-breaker.

ÓDúill changed his game slightly in the tie-breaker and despite the gallant effort of Hession, Fíachra never looked in doubt of going through to the semi-final stages, winning: 15-10 14-15 11-6.

The semi-final, which was played on Sunday morning in Carrickmore, Co. Tyrone saw ÓDúill face Tipperary's Evan Carey. Carey had came through a titanic battle the previous evening against Cork's Eric ÓDúláine and looked to be in impressive form.

Battling shoulder pain, it took ÓDúill a while to settle and warm up in the first game against the hard hitting premier county player, but managed to do enough in game one to take it: 15-9.

The Year 10 St Paul's High School student did little wrong and a lot right in game two, securing his place in the final: 15-9 15-2.

Shane Whyte of Westmeath came through the other half of the draw and was in stunning form.

Carrying injury, ÓDúill again took time to warm up and quickly found himself 11-3 in arrears, he managed to claw his way back to 11 points, but the deificit was too large to close as the lake county player executed his shots with power and precision to go one game up.

The Orchard man used the time between games wisely and started Game Two in the form he had finished Game One, taking the game 15-1 to set up a tie-break game.

The tie-breaker was full of great serves, kill shots and passing shots by both players. It was the Armagh man however that took an early 9-4 lead and although the brave Whyte did score five more aces, it was ÓDúill who went on to regain composure and claim the National title: 11-15 15-1 11-9.