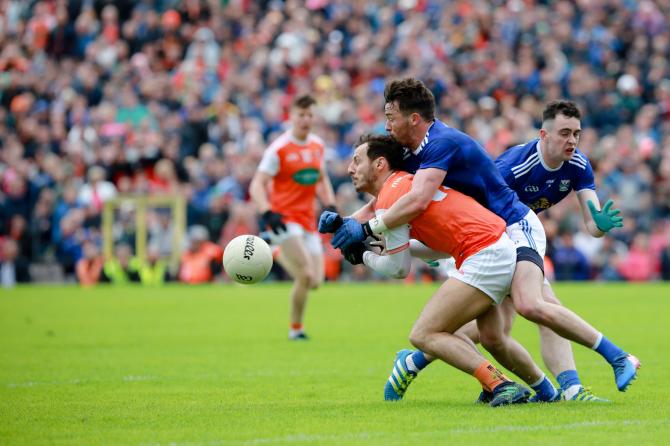 JAIME Clarke in action against Cavan.

IT was a mixture of kicking themselves and thanking their lucky stars for many of the fans leaving St Tiarnach's Park on Sunday and they'll hardly have enough time to catch a breath before returning for the replay at the weekend.
Armagh's assistant boss Jim McCorry is another player who was relieved to be still in the Ulster Championship and disappointed not already be in the Ulster Championship Final.
“Both [relief and disappointment],” said McCorry.
“Obviously a game like that was going to be nip and tuck and it was like that against Down as well. “The difference was that we had the game won and let Down back into the game and today that wasn’t the case. Even though they had a man less for a period conditions were really bad for both teams, there was a strong breeze and not too many scoring opportunities.
“In saying that we missed 1-04 in the first half and I would say critisim to our own game management towards the end as we turned over the ball in our own 50, which allowed them to get the equalising score.
“It is heartening that we are still in it and probably in this game you learn more and between Cavan and ourselves they should certainly benefit in the long-run.”
The hits were hard and there'll need to be plenty of ice and deep heat over the next few days as Armagh have seven days less to recover and prepare than they did following the win over Down.
Jarly Og Burns took a bad knock to the head, Forker was playing through pain, while every player took heavy hits, so the former Kilcoo and Down manager feels it is imporant he maximises his time with the Orchard team.
“The last time it was easier because we had two weeks to prepare but this one is all about recovery this week,” said McCorry.
“We are not really going to be able to spend much time doing a lot but the areas that we need to focus on is our game management and our scoring. We need to improve on that.
“I think the men that our men that were tasked of marking their key men such as[Dara] McVeety.
“They will be out next week aiming to set that record straight and some of our players will be wanting to improve.”
Armagh will face Cavan in the Ulster Senior Championship replay in Clones on Sunday (June 9) at 4pm, which will be preceded by the All-Ireland Qualifiers round one contest between Monaghan and Fermanagh.