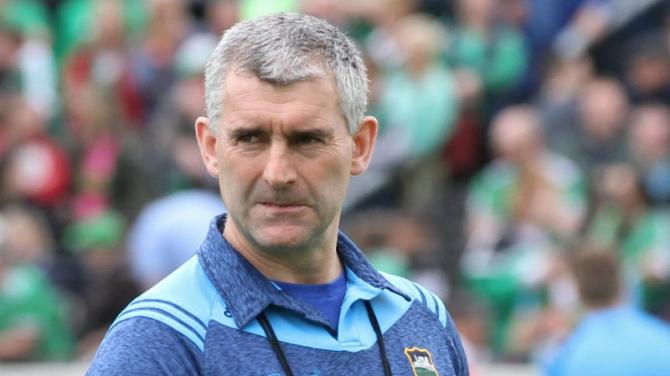 Liam Sheedy sat before the assembled media at a recent press evening. The interview lasted twenty five minutes and it could have gone on as long more as the Portroe man continued at breakneck speed and had all the answers at the tip of his tongue.

Sheedy, in his second spell as manager of the Tipperary team, appears to be relishing the task suggesting that his bosses at Bank of Ireland Finance have been very good to him allowing to take up work in the Munster region. He thanked his friend Michael Ryan (former Tipp manager) in advising him to take on the position of Tipperary manager.

Sheedy has brought Tipp into the Munster final on the back of four impressive wins in the Group stage.

However the run hasn’t been without setbacks. “There were times when I had only twenty six players at my disposal during the league” but the players recovered in time for the championship.

However he didn’t foresee that two of his best hurlers, Patrick Bonner Maher and Cathal Barrett (injured against Limerick last day) would miss the Munster final next Sunday and as a result he has to replace both players, a task that will test the strength of his panel?

“I'm devastated for the chap (Maher). What he has brought to the team over the last number of weeks has been exceptional.

“He has been a really strong player and was in full flow and a Bonner in full flow is a very difficult man to mark,” said Sheedy about Bonner Maher who will miss the rest of the season.

“I am gutted for him on a personal level but the show must go on and he will be an integral part of our team even though he won't be inside the white lines because he is a really strong leader within this group. He has been there ten years now. Unfortunately we lose his impact on the pitch so it presents an opportunity for my panel. Everybody knows the importance of the strength of the unit and can the panel manage to deal with this,” said the Tipp manager.

He added. “We lost James Barry for the match against Clare and Barry Heffernan stepped in so we have experience of where we have had to deal with losses and it looks like we will have to find two players to replace Bonner and Cathal (Barrett) at this stage but that presents a massive opportunity for two other players to step in so that should make training really intense.”

“He is a unique sort of player, you all see what he brings to the jersey but at the same time you have a number of players I could name off that have really good championship form and other guys that are young and chomping at the bit. You are not looking to replace a Bonner with a Bonner because you can't do that but you are looking to know if the next guy can step in and play to their level and I am absolutely happy that we will find that player because the work they have all put in other the last seven months.

“A Munster Final is a good place to get it tested, where you get a chance to go in and play the current league and All Ireland champions,” claimed Sheedy.

How is Cathal Barrett coming on?

“I can't see a hamstring right in two weeks. We have good guys go in, Sean O'Brien hadn't played in the last two games and went in (v Limerick) and did very well. Alan Flynn stepped into the breach last week so there are opportunities coming for guys and that is where we are going to learn, and unless you have that strength in depth on the panel you are not going to be competitive in the latter stages of the championship.

The new Munster Senior Hurling format has been in vogue for the past two seasons and it has created more demands on the players?

“It is but it brings in the aspect of recovery way more. Previously you got 4-5 weeks off and went back to the club before coming back in again. Recovery is massive now in terms of the game where you spend a lot of time preparing, spend a lot of time performing, then you have got to make sure you get the recovery piece right. It's trying to get that balance right because if you over cook it, you are not going to be at your best either.

“I am very fortunate to have a superb backroom team around me, people that are operating at the top of their game. They (the players) have put in a massive seven months. Their body shapes are really good. It was difficult last year where you were facing into four weeks in a row, you can't really do any conditioning at all so that really stops so it was very difficult in how Tipp were positioned last year to manage a proper strength and conditioning programme, whereas for us we played two weeks in a row, had a break for a week then a game, then another break for a week and another match so it was much easier for us to get that right and the players are benefitting from that,” said the Portroe man.

Liam Sheedy was always confident about the direction his team was going as they progressed to the League quarter final before bowing out to Dublin. May 12 was the destination with Tipperary travelling down to Pairc Ui Chaoimh for the clash with Cork.

“You go back through the (League) matches, most of them were lost by a point. We definitely didn't peak too soon but you felt there was something building because we had a lot of guys coming back from injury. There was a period there in the league where I wasn't sure had I 26 players to tog out on a given day, that's how depleted my squad was.”

“May 12 was always a date that was etched in our calendar. We knew what we had to do was when we finished in the league we knew exactly the run-in that we had to get to championship. We knew we were going to arrive there fully primed and ready, and whether that was enough to get us a result against Cork, where we have won twice down there in one hundred years so it's not a place we had a good record, but we knew going down there that we had prepared as best as we possibly could and that is all you can do.”

They beat Cork and followed up with wins over Waterford and Clare and made four changes from their usual line up against Limerick. However Sheedy admits that Tipp wanted to maintain the winning habit.

“We played every game on its merits. We were not in the Munster Final mathematically so we didn't feel we had any cushion. Momentum and winning matches I don't see as being a bad habit. Certainly we felt it was another opportunity to come back in front of our own home crowd and bring a performance again.

“They (Limerick supporters) travel in numbers, they are fanatical about their games in there.

“One of my goals was to make sure when the supporters look in that they feel they have a team to follow and the lads have been doing everything they can. Wherever they finish up and whatever they do this year it won't be for the want of trying and it will be the same on Sunday. In fairness to the crowd (Tipp support) they are responding to that and are liking what they are seeing. Ultimately that is a good sign. We won't outnumber them (Limerick) in their own back-yard but certainly we'll bring a crowd as this team are doing all they can for the county and the jersey.

“We have very good players. One of the areas we still have to crack is our discipline. We are still giving away scoreable frees at a higher rate than anyone else. It is going to catch us if we don't sort it out so by not giving up the free and forcing players to strike under pressure then there is a less chance of it going over the bar. The likes of Peter Duggan, Aaron Gillane don't miss. Obviously there'll be a lot of work done on the training field in the coming weeks to improve that because if you are going to give 10-12 points away from placed balls, it's very difficult to win a game,” he added.