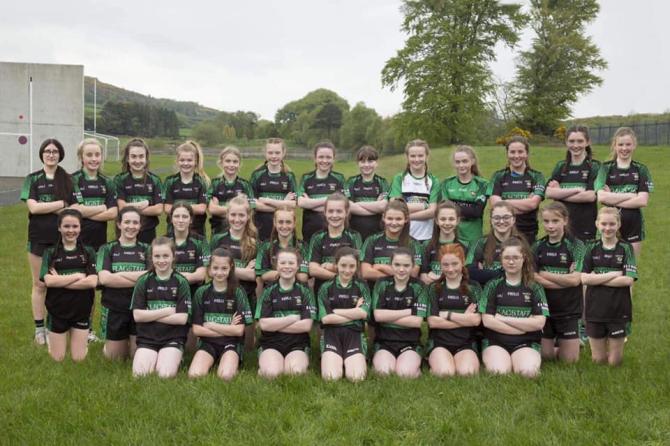 NOT many Armagh fans were more delighted than the Killeavy U14 girls team when Castlebar was announced to host the All-Ireland qualifier this weekend.

As Armagh champions, the Feile team were themselves heading ‘into the West’ tomorrow (Friday) to meet up with host team Castlebar Mitchels, and fellow Feile adversaries Kilmoremoy (Mayo) and New York, in the Division II playoffs.

As a key part of the Feile tradition, the Killeavy girls will be staying in host family houses for the duration of their footballing adventure.

In a last minute addition to an already packed schedule, the Mitchels host rearranged everything to allow Orchard and Yew-tree fans to attend the qualifier, and they also bought all the Killeavy girls a ticket for the game.

Killeavy will travel to Ballina for their two games tomorrow (Friday), after their trek across the country, and face the host team on Saturday morning, where all niceties will no doubt be suspended for the duration of the match.

Cup and Shield contestants will then be decided, and the teams will journey on to Hedford and Glencorrib for the Cup Competition, and Cong and Kilmaine for the Shield qualifiers, before both competitions will be decided in finals in the Connacht GAA Centre, Knock.

No matter what the outcome on the field, all involved, girls, coaches, mentors and parents, will have a weekend to never forget, and if the green and black ribbons of Killeavy are wrapped around some silverware on Sunday evening, it will make for even an more magical memory for this small part of the GAA family.

If Armagh can defeat the vanquishers of their arch-enemies Down at the same time, their Cup (or Shield) will truly ‘runneth over’.