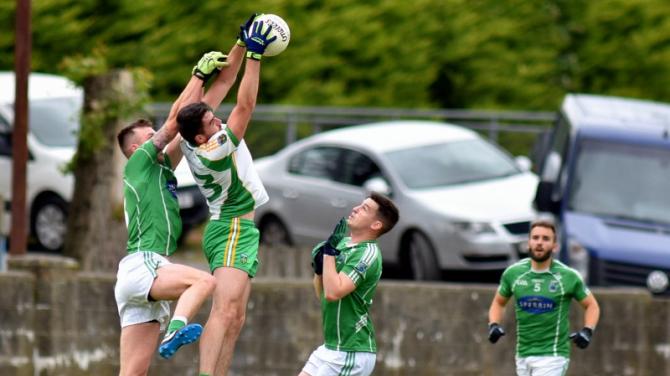 MULLAGHBAWN manager Peter McDonnell has urged his young side to grasp the opportunity in front of them and to try and emulate the county and Ulster title winning side of 1995.

The Bawn came from seven points down against Shane O'Neill's to win by a late, late point and they have virtually secured promotion back to the Senior football for the first time in nine years.

A win or a draw in their remaining match against Wolfe Tone will secure the Intermediate A title and promotion.

“The most satisfying thing about it is that if you take Kieran Grant, Gerald Doherty and Eddie English out of that team, the rest is all U21.

“The team that beat Crossmaglen in the U21 Championship was all of those fellas out there bar those three fellas.”

Indeed the young Mullaghbawn players have stood up to the rigours of the Intermediate A League and it is that abundance of youth along with no shortage of talent and nurturing that the Mullaghbawn boss hopes the seeds have been sown to bring senior silverware back to the rural south Armagh club.

“Every man counts and to be going into the Senior Championship with a young team as opposed to going up with an old team, is something.

“When we won the Senior Championship back in 1995, we wouldn’t have won it without Neil Smyth and Fergal McDonnell and those run of fellas, but also we wouldn’t have won without the Minors we had and one of them was Enda McNulty, there were U21 players Justin McNulty, Paul McNulty and Kieran McGeeney was just above that.

“We needed that whole spectrum of age and like all country clubs we had small picks and we needed everybody to the wheel but in this instance Kieran Grant is only 27, and the next man is Eddie English and he is only 23.”

Niall Ward, Cormac Smyth, Seamus Strain, Shea Loye, Eoghan McDonnell, Eddie English and Gerard Doherty are magnificent footballers and key to Mullaghbawn's progression and McDonnell, who was the last Armagh manager to win the Anglo-Celt Cup feels that a bright future can be in their hands.

“The plan is to go on, we are on a journey and there can be upsets along the way but one way or another this group of fellas are on a journey, where they go on that journey depends on the lads,” McDonnell said.

“Whether they stay injury free and they keep motivated, they will have a lash at it and you don’t know where it ends. This club goes in cycles and we are just on a rising tide at the moment but it hasn’t been easy for us.

“Those lads will be now competing against seniors and they will have to mix it and be cuteness wise and they have done fairly well.

“We are up but we need to win it because second place is a volatile thing, because if the winners of the Intermediate Championship isn’t any of us [the promoted two] then it is they and not the second positioned team that goes up.”