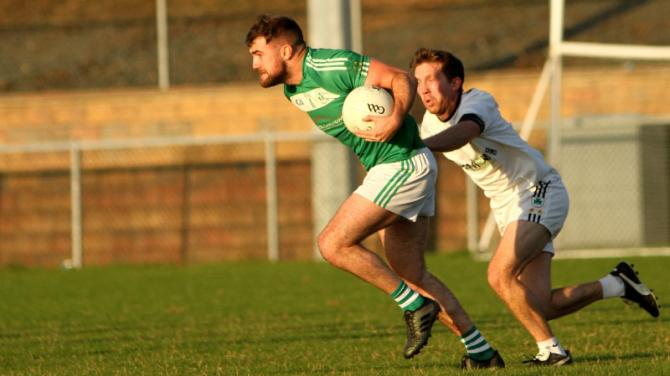 NEWRY Shamrocks win over Ballymartin has persuaded manager Marty Rafferty to change his stance on the backdoor after his side’s magnificent win on Friday night.

Shamrocks are in the Intermediate semi-final for the first time in a generation, after hammering four goals past the Whites in Friday’s double-header at Clonduff.

“It is strange to be back in because I wouldn’t be a big fan of the backdoor but now I definitely am,” said Rafferty.

“It was a good gutsy performance, it wasn’t pretty at times but as the saying goes, goals win games and we got enough just to get us over the line.

“We had played Ballymartin three times already this year - they won two and we drew the other and they have all gone down to the wire, so we were due one.

“It is a bitter pill for Ballymartin to swallow because they beat us in the last round and then they had to meet us again. It was a good motivating factor for us because we knew we didn’t do ourselves justice the last day in Burren, so it is just good to get over the line.”

And Shamrocks did just enough, but it wasn’t easy as Ballymartin were battle-hardened and with big Peter Fitzpatrick stroking over six long-range beauties they were always in the mix.

Cathal Doyle and Fitzpatrick had traded points with Shamrocks Niall Rafferty, before the Newry men enjoyed some luck when goalkeeper Colm Heaney’s 45’ landed in the Ballymartin net.

The dangerous Jody McGovern extended their lead with a cracking point, but by the 26th minute the sides were level as the Whites hit back with points from Fitzpatrick, Conor Cunningham and Owen Collins.

A 43-metre free from Fitzpatrick put Ballymartin in front and they pushed further ahead with Paul Quinn’s free and another point from Doyle. The Whites were controlling the tempo and forced some strong defending from the Newry men.

Niall Rafferty took the proverbial bull by the horns when he steered over a fantastic 50-metre point, which was a welcomed score for the Shamrocks, but then Quinn went on a darting run down his right wing before turning inside and squaring to wing-back Noel Kerr and he hammered low and into the net.

Ballymartin were 1-08 to 1-03 up with half-time approaching before Nathan Murphy finished off a super move with a stunning goal put Shamrocks back in the game, with the last kick of the half.

Shamrocks boss Murphy knew his side had a great opportunity to reach a Championship semi-final and told his boys to give it their all.

“I said get out and show yourself,” said Murphy.

“Show people what you can do and take your chances. In the first half we were going for the fancy scores and we were trying to thread passes or score from impossible angles.

“So we just needed to get back into the game and let their legs do the talking because they are in good shape and a lot of them are young, so just get the ball in hand and run, run, run and get the right men on the ball and it will end up in the net and in fairness we did that.”

Ballymartin kept chipping away with points to keep their noses ahead but the cat was put among the pigeons when the brilliant Jody McGovern played a sweet one-two with Rafferty, to cut through the Whites defence before off-loading to Jack Haughey who confidently rattled into the net.

And Haughey steadied the ship with his converted free to level the scores on 40 minutes, but he wasn’t done there as again McGovern, Murphy and Rafferty linked up to release Haughey at the back post and the Hogan Cup winner blasted into the roof of the net.

The Newry men were ahead and they battled brilliantly to stay that way. Fitzpatrick and Ross Cunningham had narrowed the gap to a point to leave a frantic final ten minutes, and it was then that Shamrocks stood tall. Jack Mallon was immense in midfield, making fine catches and driving runs.

Ballymartin threw the kitchen sink in search for an equaliser and they looked through on goal when Shamrocks’ full-back got an outstretched finger to intercept the attack.

Shamrocks had chances too but Heaney’s shots dropped short however with the game in the balance the Newry men had cool heads to get them over the line and a close-range converted free from substitute Kevin Hegarty and a fine strike from another sub Josh Durnin sent the Shamrocks into the semi-final.

And the Shamrocks boss praised his squad.

“There were a couple of big free-kicks, [Kevin] Hegarty came in there and he and few other players would be disappointed not to have started but they came on and done their job and they did exactly what they were asked to do and it was team effort to get over the line,” said Rafferty.

This was a fine team performance and if players such as Damien McKeown, Jody McGovern, Jack Mallon, Jack Haughey, Luke Byrne, Daniel Kane and Josh Durnin can bring their best to the semi-finals then Shamrocks have a great chance of making a county-final.