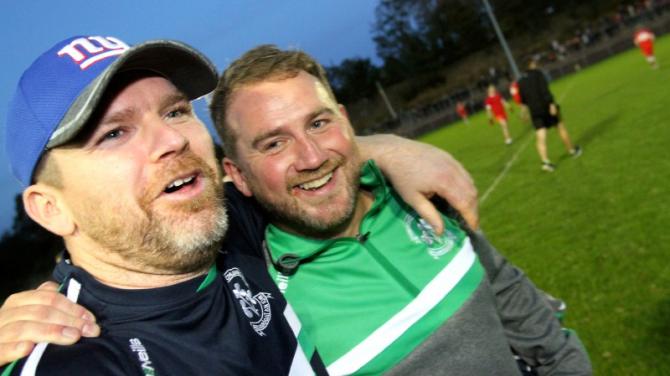 AS his young side brace themselves for the club's first Championship Final since 1973 on Sunday, Shamrocks joint-manager Martin Rafferty hailed his group's character and resilience en-route to Sunday's showstopper.

The Newry team looked dead and buried at half-time in their semi-final against a teak tough Darragh Cross, who threatened to run away with the game, yet Rafferty's side obdurately stuck to the task ahead, chipping away at their opponents in the second-half and slowly turning the tide to prevail against all odds by 1-13 to 1-11, to the delight of the travelling Newry support.

“The support down in Newcastle on Saturday was brilliant, it was supposed to be at home but Darragh Cross objected to that, so we were happy enough to go anywhere because you don't don't get to the semi-final too often.” said a buoyant Rafferty.

The proud manager said that the commitment of the lads was one thing he could never question, as he praised the group for buying into his and co-manager Marty Tumilty's vision.

“It was a good occasion and it's a good achievement for the young lads to get to the final. If they had have walked off the pitch getting beat by a good Darragh Cross side, it would have hurt, but you would have been able to accept it as long as they give it everything that they have.

Hugely competitive as a player, with an insatiable will-to-win, Rafferty freely admits that those characteristics have followed him into management, yet he believes they're tempered by a sanguine acceptance that so long as a player does his best, he, as a manager, can have no complaints or reason to deploy the hair-dryer.

“I won't say I'd ever be happy in defeat ever but eventually you can get your head around it and say they gave everything that they had and that's all you can ask for,” said Rafferty.

However, that fierce competitive edge still burns brightly and he quite candidly tells me that he abhors losing.

“When you get this far you don't want to lose, but what we've tried to instil in the boys is that there's no regrets coming off the pitch and that they give it everything they have.”

When it became apparent that Annaclone were too far ahead of the pack in Division Three for Shamrocks to have any realistic chance of gaining promotion, Rafferty and Tumilty's attention shifted to the championship, yet the coach said that there are lessons to be taken after last week's league defeat at the hands of Teconnaught, who they obliterated in their golden championship run.

“The game against Teconnaught was a reality check. I know the focus might have been on next Sunday, but we've a panel of 42 and boys still have to show what they're about if they want a starting 15 jersey.

“With only one team going up and Annaclone not losing at all, I suppose we realised after the second Ballymartin game that we weren't going to win the league, so the boys went away and enjoyed their summer holidays and came back fresh and ready for a go at the championship,” he said.

“It's a change of approach when last year we were pushing for the league, whereas with the league gone, the championship was a new competition and something to play for. If you'd have told us at the start of the season we'd get to the semi-final then we'd have been happy with that, but hopefully we can just keep it going.”