Oisin: 'No more morale victories - it's time to deliver' 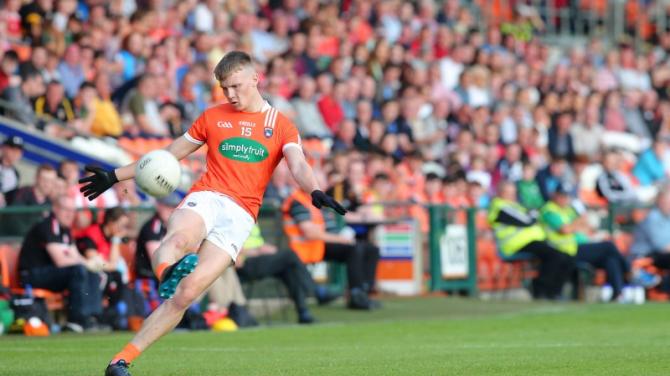 This year there will be three groups of three teams, with the winners of each group and the best runners-up making the semi-finals.

The McKenna Cup gets underway after Christmas, on Sunday, December 29, and with the National League fast approaching at the end of January, Armagh's Oisin O'Neill wants to hit the ground running.

Last year the Orchard County maintained Division Two status but had they held out leads over Kildare and Clare, they may have won promotion and while they enjoyed championship wins over Down and Monaghan again they were close see out Mayo, but fell short.

The Crossmaglen player said they were disappointed with how their season ended, even though Armagh won plenty of plaudits and admirers.

But O'Neill said his side are no longer interested in pats on the back and with a strong core of players and manager Kieran McGeeney back for his sixth term in charge, he wants to close the gap and compete with the top teams in the country.

“Collectively it was frustrating because we felt we had the group of players there that could push on, in 2020 we have said that there can't be any more morale victories or being good entertainers or whatever, we have to push on and it is time to deliver,” O'Neill said.

“We have been involved in a lot of great games but ultimately that is not as why we are there as players, we are training and playing to be successful and to hopefully win things for Armagh.

With the prospect of the falling into the Tier Two of the Championship could be a stark reality should they suffer relegation from Division Two of the National League, O'Neill said he doesn't agree with the decision to split the championship in two like this, but he is concentrating in forcing his way into the team and he wants Armagh to be looking up and not do

O'Neill didn't play feature in the Championship for the Orchard men as he battled back from injury last season but having been in blistering form for his club Crossmaglen Rangers as they won back-to-back county titles, he is raring to go for his county but he isn't taking anything for granted.

“When Armagh were beat by Mayo then the Armagh Championship started with Cross and I was able to get a really good block of training in, there was two months when there wasn't much happening so I was able to use that as a pre-season,” said O'Neill.

“Personally this year I just want to be able to force my way into the team. Armagh is an incredibly tough squad of 26 to break into.

“We have a squad of 45 men at training every night and every one of them is trying to get a jersey and I am no different. No-one is any different, it doesn't matter how many years you have been playing, you have to be ready to go every night you go to training because ultimately that is where you can earn your place.”

While Oisin was sitting frustrated in the bench last season, his younger brother Rian was playing a staring role for Armagh, which earned him an All-Star nomination, along with Jarly Og Burns, as well as the Armagh Player of the Year.

Oisin is used to playing alongside his brother and Armagh have yet to see the best of how they can get the best from each other and the understanding they have on the pitch. It is something to look forward to but Oisin is confident of the talent coming into the squad.

“We are competitive but I suppose we are very close as well, there is only 18 months between us and we have always played in the same teams and same school teams, we both went to St Colman's in Newry and we always played there together as well,” said O'Neill.

“Rian had a great year personally last year and I suppose anyone who watched club football in Armagh knew that he was ready to make the step up.

“The thing is in Armagh is that we have a younger group of players coming through now that are ready to add to the thing as well.”