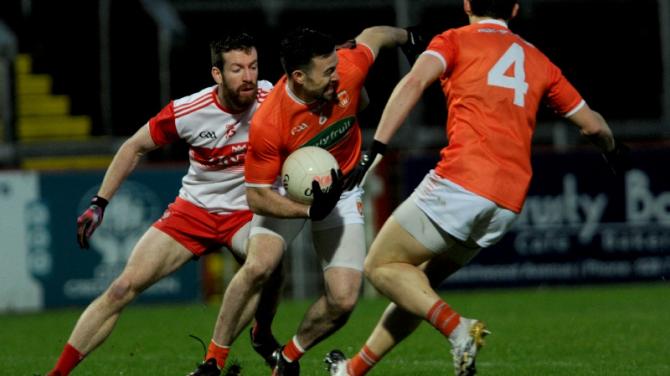 Armagh’s Aidan Forker has received an All-Star nomination for his efforts with the Orchard County in 2020.

The Maghery clubman is the only Armagh player selected as a PwC All-Star nominee.

This is Armagh’s fifth nomination in four years, with Rian O’Neill (shortlisted for young Player of the Year) and Jarly Og Burns selected last season.

Rory Grugan was an All-Star candidate in 2018 while Jamie Clarke also got his name put forward the year before.

Aidan Forker was a main driving force behind his side getting to division one and was outstanding for Armagh in the past twelve months.

While Kieran McGeeney’s side had a short championship campaign, Forker did enough to be recognised for his efforts.

The attack-minded defender missed just one of Armagh’s eleven outings this season, the round two league clash against Laois.

He is one of the toughest defenders in Ulster and relishes the man-marking roles handed to him by Kieran McGeeney.

The 29-year-old excelled against Derry in the Ulster Championship, outscoring his marker Niall Loughlin from play, with two points to one.

In the semi-final he as detailed with one of the hardest jobs in county football, keeping Michael Murphy quiet.

Once more the Maghery man stuck to his task rigidly and kept the Donegal star scoreless from open play.

Forker is also in line to pick up an Irish News All-Star award while some of his Orchard County teammates have also been nominated.

Ryan Kennedy, Oisin O’Neill, Rory Grugan and Jamie Clarke are all in with a chance of winning an Irish News All-Star.

“Aidan, a tough dogged tenacious all rounder with a sweet left foot, has been nominated in defence. He's a leader on and off the pitch. A well deserved nomination.

Players from 10 different counties are represented in the final list of football nominations that make up the PwC All-Stars announced today.

The history-making, six-in-a-row All-Ireland champions Dublin head up the high-calibre 45-strong shortlist with 13 men throughout every area of the pitch.

Beaten finalists Mayo are next with 12 contenders for the final 15.

After winning a first Ulster title since 1997, Cavan have been rewarded with seven nominations. The Breffni County’s previous winners are Ollie Brady (1978) and Dermot McCabe (1997).