McGEENEY: 'WE NEED A MIRACLE' 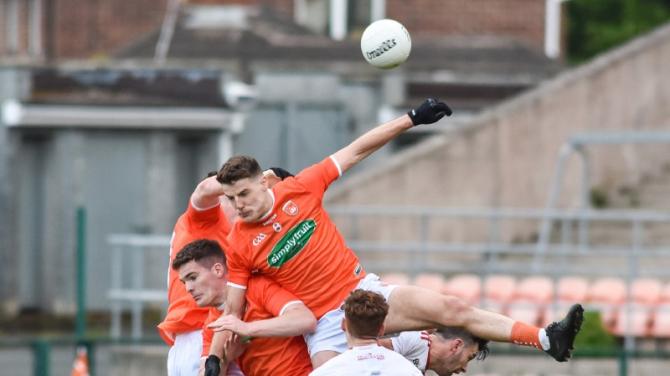 With Forkhill’s Paddy Burns and Whitecross’ Mark Shields out injured for the season, Crossmaglen’s James Morgan, Maghery’s Aidan Forker and Ballymacnab’s Ryan Kennedy look also to be in doubt and are almost certain to miss the last group game against Donegal.

This is a massive blow for the Orchard’s league and championship ambitions and the Orchard boss expects to have to plan without several of his star players.

“We would need a bit of a miracle this week to get a few boys back,” McGeeney said.

“Losing five players of that calibre, Morgan, Kennedy, Forker, Paddy Burns, you are losing serious ball players. I don't think there are too many teams that you can take five out of their defence in that space in time and still continue.

“With Ryan [Kennedy], it's bad now. And Aidan [Forker] and [James] Morgan are the same. Even for them to come off, Paddy Burns is definitely out for a good while. Yeah, it is tough, and it is a hard one to take.”

With Tyrone beating Armagh and Monaghan drawn with Donegal, this weekend is winners take all, with all teams in a position to retain divisional status or fall into the relegation play-off. There are so many permutations, but Armagh know they need to win if they are to be sure of avoiding a relegation play-off, even a draw might be enough.

That’s a huge ask, but McGeeney has a big squad. Stephen Sheridan, Niall Rowland and Ballymacnab’s Jack Grugan have not featured this season and should make the squad on Saturday.

Grugan is a forward that could cause any team problems and there is no point in wrapping him up for the championship.

Of course, keeping Donegal at bay without your top defenders is another puzzle McGeeney and his management team must figure out but the players who came off the bench and moved positions did well against Tyrone.

“They showed unbelievable resistance, but I suppose you want the result at the end of that,” said McGeeney.

“I was impressed with the younger players coming on, Turbo, McQuillan, Duffy and then you take the two O’Neill’s, and they are all from that U21 age group.

“So, it is a good backbone. Rory [Grugan] was outstanding for us tonight again, before his black card. “They definitely showed some mental strength today but maybe those were simple scores we should have taken, we even missed a couple in the last quarter and when we brought it back to three, we could have kept it down to two and it is then a different game, so we have things to work on.”

Donegal could be without star player Michael Murphy and as Monaghan scored four goals against them at the weekend and could have bagged more, should give the Orchard men some hope of delivering a result.

Armagh play Donegal on Saturday (May 29) at 7.30pm in the Athletic Grounds.