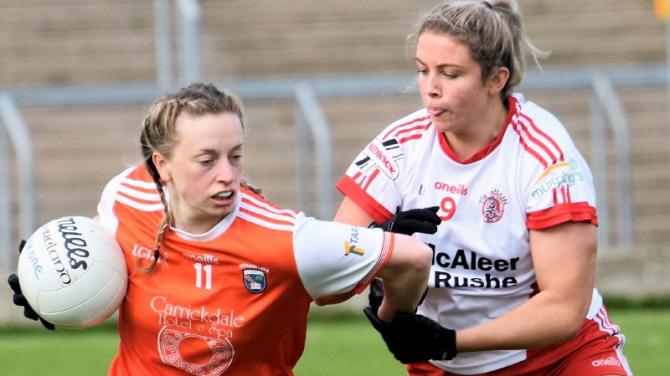 AN Aimee Mackin penalty on 59 minutes which put Armagh in front for the first time in the entire match snatched a vital victory for the visitors against Tyrone in atrocious conditions at Omagh’s Healy Park on Sunday.

In the end, Armagh got their season off to the expected winning start, but the Ulster champions left it uncomfortably late before claiming the points in this opening NFL Division Two northern region group game against a team they had trounced twice last autumn.

The Orchard had 13 points to spare in the Ulster semi-final in Crossmaglen and won by 12 at Breffni Park when the teams met again in an All Ireland group game less than a fortnight later, but Tyrone were well on course for a revenge victory here.

Armagh got just a single point in the first quarter and went seven behind after the water-break, but last Halloween’s hat-trick hero Aoife McCoy pulled back a goal and, although Chloe McCaffrey raised her second green flag, the visitors posted two points in injury-time.

Indeed, Tiarna Grimes nearly added another just before the break, but Ronan Murphy’s side still went in four down with the scoreboard showing 3-4 to 1-6 on a miserable afternoon more in keeping with when the National League usually starts in early February than late May.

Two of the three Crossmaglen players in the visiting line-up, club captain Aveen Bellew and the returning Lauren McConville, didn’t appear again after the break, but the third sparked an Orchard comeback after the resumption.

Alex Clarke marked her first start for Armagh with a quickfire 1-01, a point in the opening minute of the second half quickly followed by a goal when the ball squirted through the debutant Tyrone keeper’s hands and was adjudged to have just crossed the line.

Niamh O’Neill hit two of her five frees either side of that slightly lucky Clarke goal before points from the All Star Mackin sisters brought Armagh level for the first time since the ninth minute when Caroline O’Hanlon had struck an equalising point.

Further frees from O’Neill and McCaffrey put Tyrone two ahead before Blaithin Mackin kicked her first ever successful free for Armagh and then subs Meabh Mallon and Aoibhinn Henderson traded points in the lead-up to what would prove the match-winning penalty.

Making her first Armagh appearance since being crowned All Ireland Player of the Year, Aimee Mackin had actually begun the afternoon with an awful 45 which was scuffed towards the corner flag in the second minute but finished it as the Orchard hero yet again.

The match-winning penalty, awarded when her younger sibling Blaithin Mackin was brought down after a brilliant run, was put away clinically and took the prolific forward’s haul to 1-5, which included three frees.

McCaffrey quickly halved the deficit but she couldn’t convert a reasonably difficult free to level the scores in injury-time as Armagh held on for a win which also owed a lot to the heroics of goalkeeper Anna Carr.

The Carrickcruppen netminder made a superb save from McCaffrey midway through the first half and an absolutely brilliant one to deny the same player in the 38th minute before needing treatment during the water-break as a result of bravely putting her body on the line.

There was real relief in the Orchard camp that Carr could continue, for with specialist reserve Brianna Mathers unavailable, Armagh’s designated back-up keeper on the day was injured skipper Kelly Mallon.

Armagh’s published line-up showed three changes from the settled side which had started the Orchard outfit’s first every victory over Mayo last November followed by that pulsating All Ireland semi-final against Dublin and Ulster showpiece win against Monaghan.

Captain Mallon and fellow forwards Catherine Marley and Eve Lavery were all ruled out by injury, with Forkhill half back Megan Sheridan and the Crossmaglen attacking duo of McConville, back on Orchard duty following two years in Australia, and Clarke coming in.

A further change before throw-in saw Harps skipper Fionnuala McKenna, who sat out last autumn due to coronavirus safety fears for her family, making her 90th start in the 91 Armagh matches she has been available for since the start of the 2012 season.

Long-serving corner back Sarah Marley had the honour of captaining her county for the first time, but for long enough it looked like the Lissummon stalwart wouldn’t have a victory to mark her proud day.

All Star full back Clodagh McCambridge took less than 25 seconds to win her first trademark turnover but, when the orangewomen went up the other end and McCoy’s low shot was deflected for a 45, Aimee Mackin showed she is human after all.

After O’Hanlon cancelled out Niamh O’Neill’s first free, big Aoibhinn McHugh, who was able to make too many surging runs through the middle, nudged Tyrone ahead again and then her goal off the underside of the bar put five between the teams at the water-break.

O’Neill had hit a second free for Tyrone and, although Aimee Mackin, who had barely been involved in the opening quarter, replied in kind, a great run from Niamh Hughes led to McCaffrey rolling in a second Red Hand goal to make it 2-3 to 0-2.

Amid the unseasonal sleet and hail, Aimee Mackin kicked a long point and free from out on the right either side of the goal from McCoy, who bundled the ball into the net at the second attempt after an exchange of passes with Clarke.

McCaffrey’s second goal followed a return ball by O’Neill, who added her only point from play, but Aimee Mackin converted a free and Shauna Grey quickly chipped in with a score after McKenna won the Tyrone kickout.

The Tyrone defender whose cynical challenge denied Aimee Mackin a clear goal chance after a good ball by sibling Blaithin should have been sinbinned by referee Garryowen McMahon, but strangely no yellow card was shown.

McConville’s comeback was surprisingly restricted to just 30 minutes as she was withdrawn at the interval along with her club captain Bellew with Coleman coming on and Killeavy’s Frances Quinn finally making her first Armagh appearance.

All Star centre half back Blaithin Mackin, who was listed at full forward here but generally played around the middle of the field, began making more of the probing bursts forward which were so effective for Armagh last autumn.

Both teams missed chances in a second half which saw Murphy introduce Harps teenager Tiarna McVeigh in place of Sheridan and Henderson make her first Armagh appearance for five years, with McKenna coming off.

Henderson showed what Armagh have been missing with a typically classy left-footed point and, as the match built to an exciting climax, her Clann Eireann clubmate Megan McCann came on for Clarke.

Playing their first competitive match under new manager Kevin McCrystal and missing injured double All Star Neamh Woods, who has captained them for much of the past decade, Tyrone won’t have enjoyed being pipped at the post.

However, this was a much-improved performance compared to what was served up last autumn and, although Armagh got over the line in the end, the Orchard crew will need to be better if they are to clinch promotion back to the NFL’s top flight at the fourth attempt.

It wasn’t a particularly convincing Orchard display but, unlike in Silverbridge last February when Tyrone beat Armagh in a league game for the first time since 1996, a win is a win and felt all the sweeter for how it was snatched from the jaws of pending defeat.

Triple All Star O’Hanlon, who started her 20th consecutive season in the orange jersey with a good display at Healy Park, will miss this Sunday’s Monaghan match due to her commitments in netball’s British SuperLeague with champions Manchester Thunder.

This will be the first of three meetings between these teams in less than eight weeks, with Armagh and Monaghan also set to clash in the Ulster Senior Championship semi-final on June 18 and then face each other in an All Ireland group game in July.