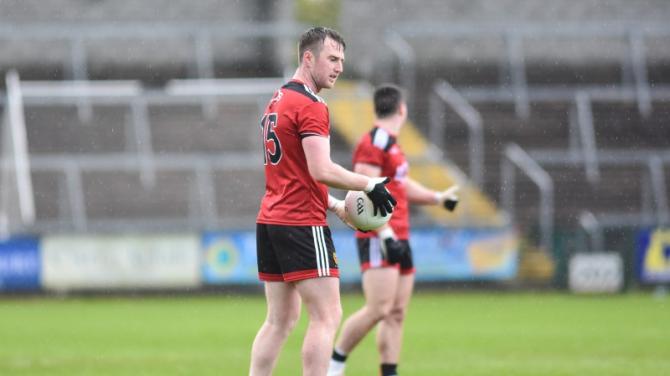 DOWN’S Paul Devlin admitted it was a nervy final few minutes against Westmeath on Sunday but feels his team showed what they are capable off for periods and hopes they can build on the win when they face Laois.

Down had outplayed Westmeath to take a six-point lead at half-time and then extend it to eight, before it was cut back to one, but importantly Down recorded their first win of the year, to finish third in their grouping.

“Again, we got ourselves into a great position and then in the last 20 minutes fell into a shell and to be honest we probably thought they were going to nick it, but we showed good resilience to see it out,” said Devlin.

“All in all, it was one half of great football and another half we creeped into our shell, but we learned from the last day when Cavan came back at us, they pipped us then, but this time we got over the line. There are positives to take out of it today.”

Indeed, there were some fine displays from the Down team, Devlin impressed as did his Kilcoo club-mates Ryan McEvoy and Celium Doherty. Cory Quinn and debutant Conor McCrickard were excellent up front in the first half and goalkeeper Rory Burns was player of the match with his performance, which included a second half penalty save.

“In the first half we had plenty of boys step up to the plate, our full-forward line is completely different from last year, Cory Quinn was good and Conor McCrickard made his first start and he showed well for us by setting up a few scores and getting himself into the game,” Devlin said.

“Listen it is a young side, and we are building on that.

“It was good to see the resilience and it was missing over the past two games.

“At the end of the day Meath and Mayo were coming from Division One last year and we are coming up from Division Three and all we can do is our best against those teams, and we saw this game as an opportunity to set statement in the response to some of the criticism we have been receiving over the past couple of weeks.

“To go and show how we can play and to be honest I thought we done that in periods, and it got us to where we were, and it got us over the line today.”

Next up for Down is a relegation play-off against Laois, which will take place in Newry’s Pairc Esler with fans being allowed in and the Kilcoo playmaker hopes Sunday’s win over Westmeath will boost confidence ahead of the make-or-break game against the O’Moore county.