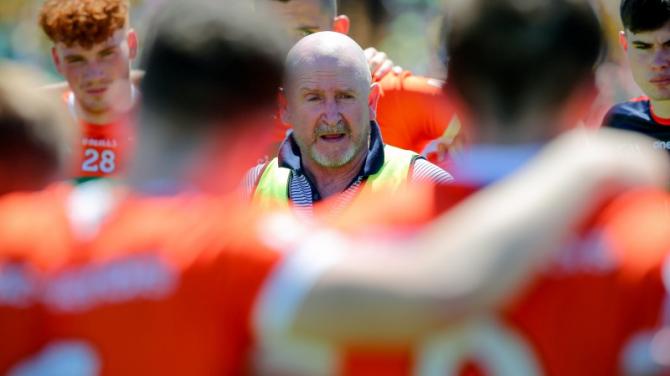 ARMAGH U20 manager Peter McDonnell expects the team that has gelled together the quickest will have the most joy ahead of tonight’s Ulster Championship clash against Donegal.

The Orchard side make the trip to Ballybofey for an 8pm throw-in.

The competition was officially announced just over six weeks ago and it’s hard to see any county enjoying ideal preparations, and McDonnell said it has hampered Armagh’s progress.

“What we would have liked to be fit to do and what we have been actually able to carry out are two different things,” McDonnell said.

“I think that what you are going to see in the championship ahead is a measure of who has had the greatest time and access to their players and the greatest time to prepare their team. I think we have all been hampered to greater or lesser extents but really it is down to preparation at this stage, or lack of it.”

Covid restrictions notwithstanding the Armagh club season has not lent itself to a fruitful county U20 team.

“I know in my own county between senior football largely on Sunday’s and under 19 on Friday night, it has been impossible to get the lads at the weekend and it has been very difficult to have anything during the course of the week. I have never seen gaelic pitches as busy,” said McDonnell.

“Our opportunities to play challenge matches has been extremely limited. If it hadn’t been for some clubs and development squads in Armagh, then we would be badly stuck.

On paper Armagh have a strong squad, with several players from last season’s panel aiming to put the orange jersey on again.

McDonnell was the last person to guide Armagh seniors to an Ulster title in 2008 and he has seen players such as Oisin and Rian O’Neill, Ross Finn, Barry McCambridge, Ross McQuillan and Jason Duffy graduate from his county U20 squads into Kieran McGeeney’s senior team.

With ideal preparation this Armagh team would be being talked as potential title challenges but while admitting he has a strong panel, McDonnell accepts it is has been difficult to prepare for Donegal, much less than looking beyond them.

“There is a wide breadth of talent,” McDonnell said.

“This is the age group that were unfortunate to lose out to Donegal two years ago at Minor level and only conceded major scores in injury time. Their endeavours that night was compromised by the red cards of three Armagh players at critical times of the game.

“There is talent and that group two years ago were well complemented with the age group that was a year ahead of them. We have a strong panel, the challenge for us isn’t the quality of footballers that we have, the challenge is trying to gel that group together in the time-frame we have. And the time-frame and accessibility are the two major factors for preparing the team with good individuals.”