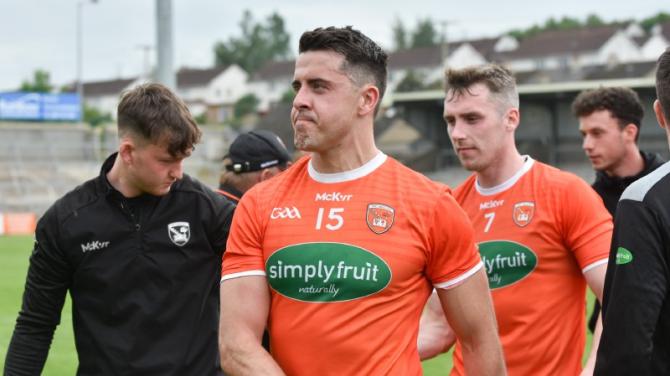 IN an era when we are encouraging people to know it’s OK not to be OK, it was refreshing to hear Armagh captain Stefan Campbell speak about reaching out to his team-mates when he needed them.

It was only earlier this season, the penalty miss against Tyrone weighed heavy on Campbell’s shoulders. He is the team captain, and that position can be a burden as well as an immense sense of pride, but the important thing is he could place his trust in his team-mates, and he had the courage to ask for help.

“Let’s be honest if I had of scored the penalty, we probably would have beaten Tyrone quite comfortably,” Campbell said.

“I just went into tunnel vision the following week. It wasn’t so much the penalty that done my head in, it was before that because anyone can miss a penalty, it was my handling and I just started slowing and I couldn’t regroup.

“I was chatting to Rory [Grugan], Aidan [Forker] and the boys who would lead the squad on a daily basis and I would need to focus on myself for a few days.

“I didn’t do anything differently I just backed myself and I had a few conversations, and I heard a few home truths from the selectors. And I wasn’t going to doubt myself, it was just a matter of going out and not refusing that shot but taking that shot and getting an early score and the rest is history I suppose.”

And Campbell’s performances since that day have been impressive, he struck a crucial point against Donegal and worked his proverbial socks off against Roscommon and never gave up until he grabbed that score, his display deserved. Soupy has always been a confidence player, he practically won the Intermediate championship on his own, such was the quality he delivered for his club Clan na Gael last year. When he is on song, there is no stopping him and as I have said before a confident Campbell can only be good for Armagh.

“From a personal point of view, it was good to bounce back, and I would say if I never bounced back, I would have faced a few critics because anyone can have a bad game but to have two or three bad games in a four-game league then there is going to be serious questions asked, especially given the leader that I am within the team,” said Campbell.

“I suppose I was happy with my performances but disappointed that we missed that league point and missed out on a semi.”

While Armagh go into Sunday’s Ulster Championship backed with the assurance, they will be playing Division One football next season, Antrim will be just as confident, if not more so after gaining promotion from Division Four.

During their campaign, they have grabbed late winners and held on, closing games out.

They have quality throughout the pitch and their ability to manage the tempo makes them dangerous opponents.

“You can’t underestimate a teams’ ability to win a tight game and close a game out,” Campbell said. “And they done that with a one-point win and followed that up with two two-point wins and then ran out convincing winners against Waterford.

“They have the Murray’s and Eastwood got 1-04 the last day, these boys are players that if we take them lightly, they can rip us to shreds because they actually could have score six goals the last day. They have runners coming from the back and Enda [manager McGinley] has them playing a nice brand of football.

“Antrim have the buy-in of the whole county and Antrim GAA are on a crest of a wave, given what the hurlers have achieved, so the footballers won’t want to be overshadowed by the hurlers. I think it is going to make for good game both sides have respective pace and are good footballers and I think with Antrim having a whole buy-in from the county they are going to be a difficult opposition for us, they are very dangerous on the attack.”

After beating Derry in an empty Celtic Park last season Armagh exited the championship and ended their season with a 15-point defeat to Donegal and the Orchard captain suggests that spanking sharpened their focus ahead of this short season.

“Geezer set us out to win that game that day and the biggest regret is that we didn’t have a go. I think we didn’t want to commit too much to the attack that day as subconsciously we knew that Donegal were setting us up for the counterattack,” Campbell said.

“I think if that day had of gone differently, we may not have learned the lessons have had the season that we have had. We may not have been as competitive, so I suppose there is a silver lining in that, and it has proved that we have team coming with a lot of form and winning mentality and an ability to close a game out and genuinely we can’t look any further than Antrim.”

Of course, Armagh can’t begin any Ulster championship campaign without looking back to the last time they were in an Ulster Final. It was in 2008 with manager Peter McDonnell at helm and Armagh won the title after a replay against Fermanagh. Ulster Final days had become almost a rite of passage during the 2000s, but 13 years later and Armagh are keen to make a return to the big stage on August 1.

“It has been too long; it took longer than expected,” Campbell said.

“I suppose I came into the team around 2011/12 and the recent Ulster [title win] was in 2008, probably being naive back then I thought I would have a few by this stage, but unfortunately that is not the way sport pans out.

“Without taking anything for granted I can’t really say how far away we are without being presumptuous or saying that we will beat Antrim and who we are going to meet in the semi-final. “And that is not the case, it is the old cliché that you just take one game at a time.

“I am not going to get caught up in the headlines, I can’t really assume anything. We showed in Division One that we can compete with Tyrone, Donegal and Monaghan but the Ulster Championship is a different ball game. Donegal might tighten up at the back, again Tyrone was pushing up on kick-outs but after considering the goals against Kerry are they going to do the same?

“So, we may find it hard to break those teams down in Ulster and there are things we are working on now that hopefully it makes for a good Ulster Championship.

“In terms of how close we are to making the breakthrough, it is really impossible to tell. We are not far away we are making great strides, but it is hard to gage on the back of a league campaign.”

Eastwood has been in good scoring form. Quick off the mark and a good eye for goal, he could be a slippery player for the Orchard to nullify.

There has plenty of speculation that Murray has an injury after the manager Enda McGinley has said as much but it will be a surprise if Antrim's talisman doesn't line out on Sunday. A ball winner and someone with no fear in attack.

He has been one of Antrim's mainstay players this season and will fancy being given the chance to mark a Division One player. Fast and strong he could be the one expected to halt Rian O'Neill.

The Crossmaglen player is getting better game by game and a joy to watch. He's catching has improved throughout the League and his range of shooting is highly desirable and he has been working on shot selection. If Rian is playing well then Armagh are purring.

Play him as a man-marker, edge of the opponents square or even as sweeper and Forker will do an outstanding job. It's been a long time since Forker could be irrational and his growth into becoming a leader over the years has been phenomenal.

He sees his job and being the worker to break up play and the spark to set up attacks and he has played his role too a tee. He has been matching his work-rate with scores recently too and Armagh need players like Hall, Greg McCabe and midfielder Niall Grimley chipping in with scores.