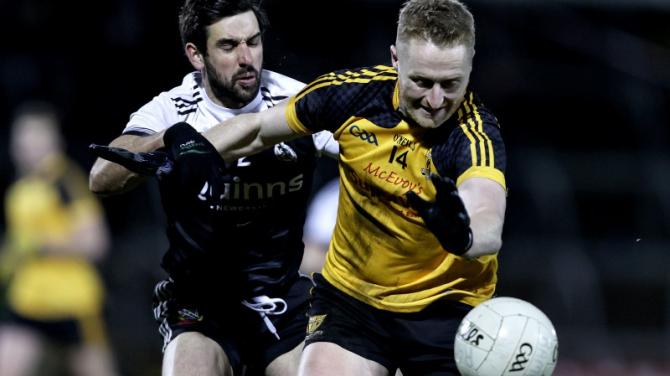 KILCOO clicked into the gear when it mattered with devastating affect as they cut Ramor to size to set up a mouth-watering Ulster Club football championship semi-final with Derry’s Glenn.

Having conceded an early goal, they could have felt in danger but instead it was the wake-up call needed and not surprising given it being five weeks from their Down championship win and last game.

“It was good to get over that because it would have been a month of inactivating,” said Kilcoo’s assistant manager Conleith Gilligan.

“Training went well but you're just really not sure when you haven't been playing matches and four weeks is a very long layoff. We're delighted to get a game in the legs and you've two weeks no to build for the next day.

“The semi-final is where we wanted to be and we just have to knuckle down and get ready to go at it in another two weeks and see where it takes us.”

Forgive me if a few details are brushed over because I couldn’t feel my fingers in the well-ventilated press area of Kingspan Breffni Park, which made typing or taking notes almost as big a task as Ramor faced with 15 minutes to go. Because by then Kilcoo had turned attention to the semi-final and they emptied the bench.

Jerome Johnston has scored a goal in every championship game this season, which is incredible and his two goals, one in each half, on Saturday night only confirmed what a maestro he has been up front in recent seasons. Conor Laverty also played a stormer, be it linking up play, ghosting past opponents or dragging defenders out of the way, he kept Ramor guessing.

Paul Devlin pulled the strings with his long diagonal passing and while he was one of the defenders caught out by Sean McEvoy’s fifth minute goal, Niall Branagan got on top and the Kilcoo supporters showed their appreciation each time he dispossessed or got out in front of Ado Cole or James Brady.

His brother Eugene again was exceptional, lining out at half-back only gave him more of a run the Ramor defence and he didn’t pick holes, he sped through them. Kilcoo’s other goal-scorer Celium Doherty had another magnificent game and his finishing was a touch of class.

Overall, it was a great if not complete performance from Kilcoo and they’ll give Glenn their fill of it.

“There was definitely some nice passages of play and look we were able to play the game at our own pace and as the competition goes on that won’t be allowed to happen, the opposition will get better as the thing goes on,” Gilligan said.

“There was some good moves but I suppose from a coaching perspective you are always looking for things that didn’t work so well. It might sound harsh but that’s how you can add that wee bit of value to see what we could do better in different phases the next day.

“We didn’t need to be the best in the country tonight, we just needed to be better than Ramor and I think we were and it just gets us to another rung in the ladder.”

Ramor couldn’t live with Kilcoo’s pace and power and it was no surprise when Jerome Johnston struck the net in nine minutes. Anthony Morgan, Doherty, Eugene Branagan, Devlin and Jerome were all on target as the Magpies led 1-06 to 1-01 at the first water-break and Ramor’s Sean McEvoy was the only player to notch a point in the second quarter. Kilcoo were on top and Dylan Ward came close to bagging a goal but it was Cavan who started the second half brightly with three points from James Brady, McEvoy and Cathal Maguire before Paul Devlin’s free kick-started a Kilcoo rampage where they hit 2-06 before Ramor replied. Doherty picked his spot for a great goal on 54 minutes, with the support play phenomenal while Jerome Johnston’s second was to finish a move he started further out the pitch, with again Eugene Branagan and Laverty instrumental.

Doherty, Devlin and Ward tagged on points as Kilcoo were home and hosed long before the referee called time.

Goals win games and when players such as Jerome Johnston and county man Ceilum Doherty are in form then your team has a great chance and the Kilcoo management was pleased with the contribution of the many substitutes.

“If you get goals, it is half the battle when you score goals and don’t concede too many at the other end it gives you that bit of breathing room for when you do have those bad patches,” Gilligan said.

“We got a lot of people out, we run the bench and some of the boys that came on such as Tiernan Fettes and Chrissy [Rooney] them boys done really well when they came on.”

Kilcoo will play the much fancied Glenn on Sunday, December 19, in what should be a fascinating contest.