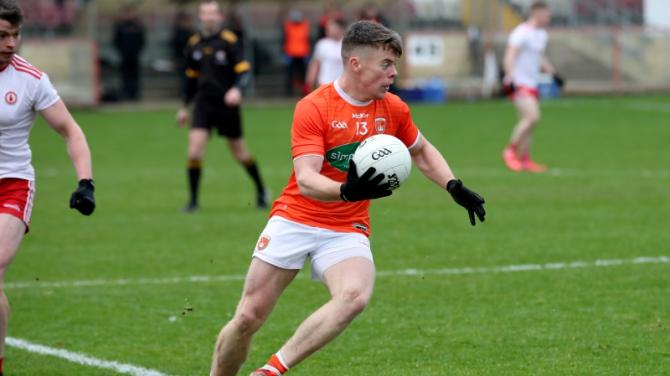 ARMAGH joint captain Aidan Nugent insists that his side are going into the lions den with the focus to beat the mighty Dubs on Saturday.

The Orchard face Dublin in Croke Park on Saturday evening (January 29) at 7.30pm, in their opening game in Division One of the Allianz National League.

Of course Armagh are massive underdogs as are most teams who face the six in a row champions, but Tyrone showed they are not unbeatable and Armagh have a plan and more importantly the players the captain feels can provide a shock.

“We are in Division One, we are not going there to drop points, we are going to win, we have worked hard these last few weeks in training, we know if we put our game-plan together we will get the result,” said Nugent.

We rate them [Dublin] very highly, the way our last few seasons have been going we have been watching the majority of the Championship so don’t get me wrong, they are impressive and everything they do is close to perfection, which puts you in good stead that you have to have your game-plan perfect if you are going to beat them.”

Nugent follows in the footsteps of Ciaran McKeever and Martin McQuillan as proud Cullyhanna men to captain Armagh. He is joint captain along with Crossmaglen’s Rian O'Neill and a cool costumer, he is player that has always led by example and that isn't going to change.

The Cullyhanna forward missed all of last season after recovering from ACL injury but he said he used his time coming off the treatment table to return in even better shape.

“I suppose it was tough looking on because you wanted to be out there and the other side of it is you seen the pace increased massively from Division Two to Division One, so if you don’t put your head down and work that you are not really going to get your place back,” Nugent said.

“So there is two sides to it really. You can either sit and take the hump or you can sort of work back and see what sort of level you are going to have to get to, because you are watching training week in week out, so it was good motivation to put the head down and get back at it.”

Like many in the Armagh squad it will be Nugent's first time playing in Croke Park, but he is unlikely to be fazed, neither do you expect it to be any other way than for Rian O'Neill, Conor Turbitt, Andrew Murnin, Tiarnan Kelly or Cian McConville to embrace. And the Cullyhanna man has been impressed with the competition for places among the forwards.

“Even last year there was no two forwards the same and we have brought in another four or five, so everyone brings something different to the game, so you know if you are not on your game that someone will come in and replace you,” Nugent said.

“Or even if you have played 50 or 60 minutes that the man coming on is going to do the same job if not better, to close it out.”

Stefan Campbell, Rory Grugan, Aidan Forker, James Morgan, Stephen Sheridan, Niall Grimley, Oisin O'Neill and Mark Shields have all played at headquarters but few have faced the Dubs, and the Orchard captain is looking forward to his side testing themselves against the Dubs.

“When you start playing football and every big game you go to watch in Croke Park, the aim is to get out there, but put that all aside, it is Division One and it wouldn’t matter of it was in the Athletic Grounds or Croke Park you are still going for the two points,” said Nugent.

“It is a nice occasion but once you get up there you just focus on the game-plan to get the team over the line.

“It is a clean slate for everyone so everyone will want to equip themselves well. We have a game-plan and the plan is to stick to it… we are still going out to apply ourselves and play the way we want to play.”

Dublin won the O’Byrne Cup for the tenth time after seeing off Laois 1-13 to 0-11 despite being down to 14 men after John Small was sent off.

Experienced stars such as Brian Fenton, Ciaran Kilkenny, Cormac Costello, David Byrne and Eoin Murchan started for Dessie Farrell’s side and are expected to face the Orchard on Saturday’s evening contests.

Tickets went on sale yesterday (Monday) and there are no restrictions to the number of fans permitted into Croke Park.