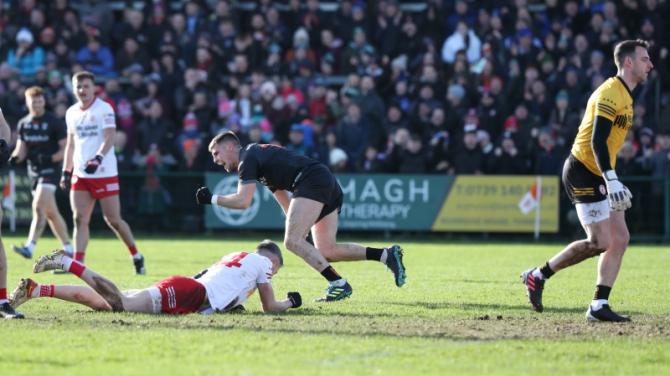 AND they say romance is dead.

On Sunday it was a wonderful Armagh love-in at the Athletic Grounds with an emphatic win over the All-Ireland champions Tyrone.

The Orchard boss is keen to remind people that it is only February and that serious business takes place later in the year. While there are many who are hopeful of bigger days ahead, most of the 13,328 fans in the Athletic Grounds were enjoying living in the present.

Any day Armagh beats Tyrone is a good day and on Sunday the Orchard men were worthy victors.

Referee David Gough was feeling affectionate too as he dished out five red cards, but not the St Valentine’s type.

Tyrone’s Michael McKernan, Padraig Hampsey, Peter Harte and Kieran McGeary, along with Armagh's goal-scorer Greg McCabe, were sent off after a melee, which took place in additional time.

The row at the end shouldn’t detract from what was a brilliant display from Armagh, who are top of Division Two after beating the last two All-Ireland Champions.

Armagh were full value for their 10-point lead at the break.

They had carried with momentum of the win in Croke Park and with mixture of pace and long deliveries they carved the All-Ireland Champions open.

The Orchard manager was happy with his sides display, especially in the first half and delighted to have conceded no goals.

“I thought we just moved the ball quicker [in the first half] and in the second half we were a little more static we weren’t breaking the lines and they seemed to get free kicks easier than we seemed to get them and that is just the way things go sometimes. They can get a run and maybe sloppy tackling or not keeping a focus on the ball and giving the ball away can lead to those things.

“It was a big thing to keep goals out we were disappointed that we didn’t get a couple more. Morgan again with two great saves in the first half. It was crucial to keep them out and in the end of the day it was the two goals that separated the teams.”

It was an almost sold-out Athletic Grounds and those who packed in got their money’s worth.

Armagh set the tone early Jason Duffy fisted over on four minutes and two minutes later Rian O’Neill floated a beautiful pass into Greg McCabe who waited behind his marker at the edge of the square caught the ball in his chest before firing into the net.

It was a cracking goal and set the Orchard off on the right foot. Rory Grugan tapped over a free before Darragh Canavan and Michael McKernan hit back for Tyrone.

It was tasty football, played at full throttle and Stephen Sheridan should have bagged a goal, he did the hard work by skipping through three defenders but his shot was too close to keeper Morgan, who saved at Sheridan’s feet.

Tyrone kicked a few wides while at the other end Ciaran Mackin struck for goal before but keeper Morgan saved brilliantly to push over the bar.

Ciaran Mackin delivered the prefect low pass into O’Neill who turned McKernan with ease before stroking between the posts. And with 15 minutes gone Armagh led 1-04 to 0-02.

There was no respite as Armagh kept pressing, Aidan Nugent and Sheridan played a neat one-two with the Cullyhanna man striking over.

Armagh tackled in numbers with precision. O’Neill (free) Tiernan Kelly (long-rang) kept the Orchard scoreboard ticking over and O’Neill displayed pure class when he turned Hempsey before firing over.

The second goal came on 34 minutes when Kelly ran at the Tyrone defence who were backpedalling after Jemar Hall’s pass, the Lurgan lad had time to pick his spot but he opted to pass to Jason Duffy who struck low at the near post – for a stunning goal.

Armagh’s sails were up but Darren McCurry’s free cut the gap to 10 points at the break and Armagh expected to see a response from the All-Ireland champions in the second half.

Jemar Hall came the sixth of six named forwards on the Armagh team to score with a fisted point and O’Neill (free) added another but Tyrone showed they weren’t going away quietly with Cathal McShane, Sludden, McGeary and then Nathan Donnelly firing over.

Aaron McKay kept cool to strike his shot over the bar after a great turnover by O’Neill further back and when McShane converted his second free the score was Armagh 2-11 to Tyrone’s 0-09 with 50 minutes played.

Tyrone were getting frees regularly and that is something Armagh will have to look at.

McShane’s fifth converted free left five points between the teams with seven minutes remaining, Armagh need to pick off the odd score as it was too long to simply hold possession and the hard grafting Jarly Og Burns fired over a needful point.

McShane converted his seventh point as the ARMAGH ARMAGH! chants erupted to levels not heard in over a decade.

Then came the mele and flashes of cards before Rory Grugan (free) tapped over from close range.

Armagh had the 14 players on the pitch while Tyrone finished with 11 and Mark Shields set up Stefan Campbell who steered over a fine point to another huge cheer.

The scenes at the final whistle, showed that this game meant more than two National League points.

“It is only two games that is all,” McGeeney said.

“People will get carried away because if you are smiling in February, you may not be still smiling in August.”

The Armagh players, management and fans have had their fill of being the nearly-men, coming close, hitting the self-struct button and each of those hard knocks is what make days like Sunday matter more. Armagh are building something but there’s a lot more of football to be played this season and there should be a few more players ready to get off the treatment table.

“It was a tough decision to take Paddy [Burns] out today, he has had a tough week sitting in the house and he was feeling a wee bit tight.

“We have Ross [McQuillan), Oisin [O’Neill], Ben [Crealy], Conor O’Neill and a few of the other boys coming back over the next two weeks, so we are hoping to have a fuller deck to pick from for our next day out.”

It’s only February but as Armagh sit on top of Division One after beating the last two All-Ireland winners, they can look to taking on Monaghan and any of the big guns with confidence.