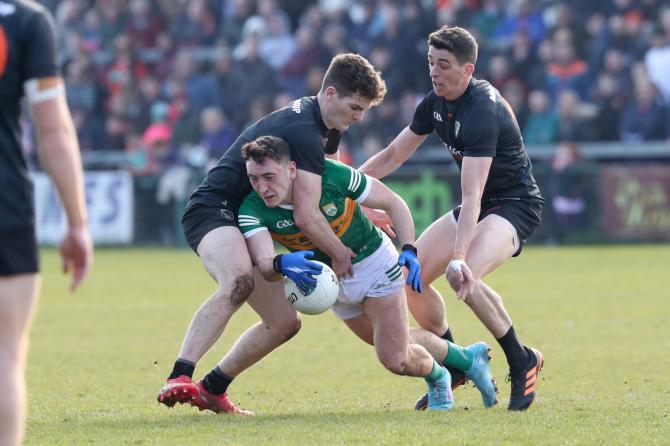 It was a heated contest played in front a bumper crowd in the Athletic Grounds, but some poor shooting let Armagh down when it mattered.

Kerry led 0-08 to 0-04 at the break, with Clann Eireann’s Tiernan Kelly, full-back James Morgan and Rian O’Neill on target for the Orchard. Paudie Clifford, Jack Savage and Tony Brosnan had given Kerry a 0-07 to 0-01 lead before Armagh’s late rally, which saw Kerry’s Savage receive a ten-minute sin-bin at the start of the second half.

It was then David Clifford (1-02) made his introduction but it was Armagh substitute Stefan Campbell that wowed the crowd with his stunning point.

But Clifford’s goal gave Kerry a six-point lead and Armagh had work to do. Greg McCabe, O’Neill, Rory Grugan and Jarly Og Burns hit back with scores but Kerry possessed enough quality at the other end to stay in front.

Kerry are in the National League final while Armagh will need to beat Donegal next week and hope Kildare see off Mayo, if they are to meet the Kingdom again in the decider.