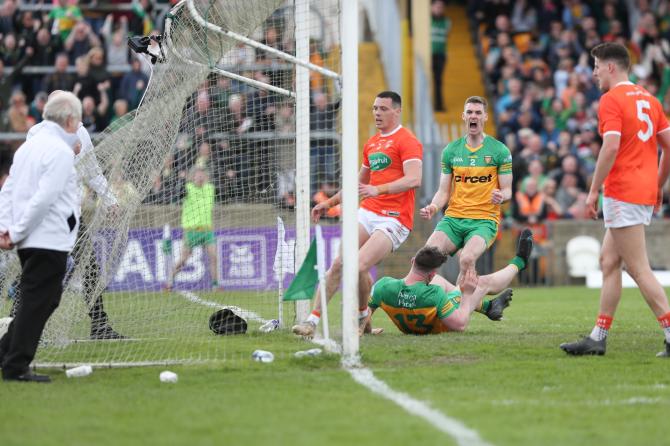 IT’S the backdoor for Armagh as Donegal put paid to any Ulster title ambitions for another season at least.

It wasn’t for the lack of effort but Donegal’s experience playing at the top level and the class of Micheal Murphy was the main difference.

Armagh trailed by three points at the break. They had played some good stuff but they had difficulty winning Ethan Rafferty’s kick-outs and Donegal duly punished.

Played in front of sell-out crowd, the Ballybofey streets, the Donegal piper, it was Ulster Championship time. The sun shone on the terraces as the seated stand was shaded and the wind howled around the ground.

The hits were going in hard, some of Armagh’s were sloppy and gave away frees, while Jason Magee powered through the bodies before striking over the bar.

Rory Grugan and Conor Turbit linked up as Tiernan Kelly floated over a beauty before Rory Grugan (free) levelled the scores on nine minutes. The sides were level on three occasions in the first half, Donegal kicked four wides while Armagh kicked one.

Turbit showed Stephen McMenamin a clean pair of heels as he kicked Armagh into the lead for the first time on 12 minutes. Scores went tit-for-tat between Armagh’s Grugan and Donegal’s Michael Murphy, who kicked three first half frees. But Donegal won five of Rafferty’s kick-outs in a row and they pulled away before half-time with Murphy, Patrick McBreaty and Ciaran Thompson on target.

Armagh were first back and they started brightly with Greg McCabe and Aaron McKay making great challenges and the Orchard made advances in attack but they failed to score despite their good approach play.

And that came back to bite when McBreaty fired into the net with 46 minutes gone. Substitute Stefan Campbell scored with his first touch but Armagh kicked a number of wides, while at the other end Murphy and Caolan McGonagle tagged on points.

Ben Crealy and Oisin O’Neill hit back with points and with ten minutes to go Armagh trailed 0-10 to 1-12 and there was to be no grandstand comeback. Greg McCabe pointed but the day belonged to Donegal.