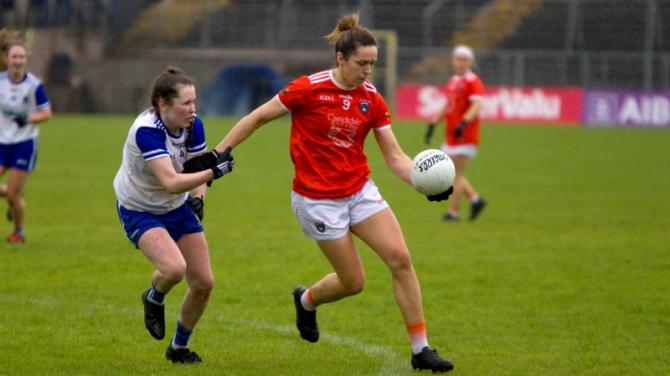 CAROLINE O’Hanlon and her team-mates were back to their brilliant best on Saturday as they put a decent Monaghan side to the sword.

O’Hanlon played a central role and after winning much of Monaghan’s kick-outs she helped provide the platform for Armagh’s razor-sharp attack as well as posting four points from play. It was an exciting, dynamic and fantastic football, and O’Hanlon said it helped right the wrongs of that disappointing National League final defeat last month.

“We’re just relieved obviously. We were hurting from the league final so it was important that we came out there all guns blazing,” O’Hanlon said.

“I think our start was really strong and that sort of set the tone for the game, so we’re really pleased and proud of all the girls for the response that they had.

“We know, if you underestimate any Monaghan team, you’re in bother. So, Ronan [Murphy] said that at half-time, ‘if you don’t come out, they’ll be right back in this game’. That wet day a goal could go in very handy.

“So, it was really, really important that we set the tone from the start. Obviously, we’re defending our title, so we want to keep hold of it.”

O’Hanlon has been in flying form with her netball side ManchesterThunder and having started for the Orchard on Saturday, she played a pivotal role against Monaghan.

“I don’t know about that,” O’Hanlon said.

“It was just good to hear the final whistle. We were talking about being relentless. We’ve been switching on and switching off probably this season, and last year probably cost us that inconsistency.

“So, it was important that we put 60 minutes together there. And I think the concentration of the girls, even when the score-line stretched out they kept going and kept to their job and that’s what we need.”

And Armagh were on top throughout, as each time they attacked they created chances and looked like scoring while defence stayed strong and were hard to beat. And it is important to note that this was no duff Monaghan side. They went into Saturday’s game as genuine contenders.

“We played them in the league and the score at half-time was four all so they are defensively tight,” said O’Hanlon.

“We just knew we had to be patient and controlled in our attack, particularly in the first half when they were sitting back in, scores were hard to come by. And I think we really created space well and girls took the right options most of the time. That’s what we’ve been working on, that’s what we’ve been talking about, so it was just really pleasing that that came off today. Because, as I say, we know that if Monaghan can keep the score-line tight it’s anybody’s game coming towards the end, so our start was crucial.

“And the players that came on continued that tone. So, it’s really important that we have that strong squad and we still have reserves there on the bench that can come on, so we can’t be complacent. “It’s a different lineout every match we’ve played this year so there’s competition for places so that’s what it’s about. You have to perform when you’re on the pitch.”

Armagh will play the winners of Cavan and Donegal in the Ulster Final, with the Tir Chonaill side favourites. The Orchard girls have reached the Ulster final for the last five years and have won back-to-back Ulster titles. Another Ulster title would be three in a row for Armagh and that would be a huge achievement.

“We’re not thinking about that yet,” O’Hanlon said.

“We’ll just enjoy today. That was a good game and we’ll see who we’re up against in the final.”