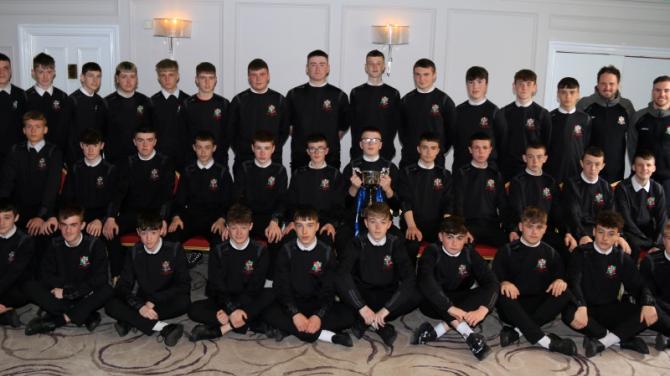 It was fantastic event to recognise the achievement of the young team, who won the Dankse Bank Mulholland Cup, earlier this year and on Friday the players were presented with their medals.

It was well attended by the Newry clubs, parents, Down manager James McCartan along with Jack Devaney and Sean Og McAteer, chairman and secretary respectively, from the Down Co Board.

Team coach and teacher Steven Poacher thanked the support and praised the work that Newry clubs are doing in trying times.

“We are overwhelmed with the support we have got from the community of Newry,” Poacher said. “People who were attached to the school as past pupils, people who have had no attachment and no affiliation to the school, it is hugely humbling and we are hugely grateful for it.

“I would also like to thank the clubs because the work that you do is astonishing, especially here in Newry, where there is a lot of challenges, and social difficulties as well. There is more obstacles in a city than there is in a rural club, so thank you to all the clubs for your sterling work.”

McGeary made the presentations to the winning teams and individual awards and said that success doesn't have to end after winning the cup.

“May this be the gateway for bigger and better things, don't be happy with ticking this one individual box,” McGeary said.

“Keep moving on. You know what it took get here, who you had to thank who you had to work with and the attitude you had to bring. So continue to move forward in life, in your academics in school, in sport along with your families and friends.

“You have put a lot of smiles on a lot of faces and it is fantastic what you have achieved.”