Murphy: Only our best will do 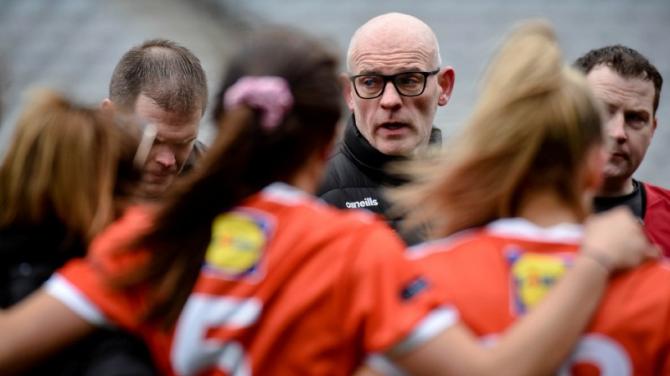 ARMAGH manager Ronan Murphy insists that his side have will have no margin for error when they take on Donegal in Sunday’s Ulster Championship Final.

Armagh are going for their third Ulster title in a row and it is a repeat pairing of last season’s finalists but Donegal are a different beast than the team that lost narrowly to the Orchard less than 12 months ago.

They reached the Division One League final, where they lost to Meath, while Armagh let their chance slip to reach the top division after the defeat to Kerry.’

Armagh should have Lissummon Catherine Marley back in contention after she missed the Ulster semi-final win over Monaghan through an injury sustained in the National League final and her return would be a massive boost.

However, Donegal are much stronger than they were last season. Yvonne Bonner is back, Karen Guthries is expected to start while Geraldine and former soccer star Niamh McLaughlin have been in incredible form this season. Armagh have added some fresh faces from last season too with Aoife Lennon making welcome return while Cait Towe made her Championship debut earlier this month.

Armagh impressed against a Monaghan side that sat back and invited them to attack, while Donegal brushed aside the challenge of Cavan. It is probably not the best preparation for either side but if the Orchard girls can match or improve the tempo and conviction they showed in that semi-final win then they won’t be far away.

But Armagh need to bring their A-game according to the Orchard boss. No less will do.

“There is no margin for error against at top team like Donegal,” Murphy said.

“We all know that because all these Division One teams and top teams leave no room for error. That is really the way we are approaching it and looking forward to it too. It is a great chance to three and retain the crown for the second time, so it would be three years in a row.

“It would be good, the girls are very dedicated, they are really professional about everything they do and hopefully they perform well and we win the game.

“We have a lot of hungry players, we are hungry and still hurting from our league final performance, when we didn’t perform, we sort of put it a wee bit to bed against Monaghan but certainly if we could get our hands on the Ulster trophy it would be a wee bit of a consolation for our league final defeat.”

People pay good money to see players such as Aimee Mackin, Kelly Mallon, Caroline O’Hanlon, Aoife McCoy, Clodagh McCambridge and team-mates playing on the highest stage. Players such as Bliathin Mackin, Lauren McConville and Grace Ferguson attack from deep with flair and speed, while Shauna Grey and Tiarna Grimes are artists with their defending skills. Eve Lavery, Catherine Marley, Niamh Marley and Fionnuala McKenna are magnificent, skilful and courageous footballers, so there is plenty of options ahead of team selection.

And the Orchard boss believes they have a system that gets the best from his players.

“I really wouldn’t coach a team any other way because at the end of the day would you fancy going to training and all you did was negative tactics? You would be bored out of your head and sure it doesn’t win you games,” said Murphy.

A win on Sunday would give the Ladies their third Ulster title in a row in what is their fifth Ulster Final appearance in a row. It is an impressive achievement and if Armagh are to retain the title for a second time, then they well be in fantastic shape ahead of the All-Ireland series.

“Ultimately it is an Ulster Final but it is also great preparation for the All-Ireland,” Murphy said.

“Hammering a team doesn’t do you any good, it doesn’t expose any areas of concern and against a team like Donegal, any weakness we have will be ruthlessly exposed if you have any.”

The All-Ireland group stages begin on June 11 for the beginning of three weekends in a row of games and the destination of the Ulster title will determine what group Armagh is in and the Armagh management are leaving no stone unturned.

“There is huge energy goes in to looking at them analysing them and the same for them,” said Murphy.

“Teams know each other inside out, how they set-up, how they play, how they attack and defend, so I suppose it is about executing that. When the ball is thrown in it is about who best executes their game-plan best that usually wins.

“The outcome of Ulster determines what group you are in for the All-Ireland,” Murphy said.

“The winners of Ulster go into group two and the runners up go into group four. So, it has a baring on who you play and it is a very good way they have done it and it is something the men could look at. It is an added incentive to win an Ulster title.

“There is a lot at stake over the next couple of weeks to see where we are at.”

The Ulster Final between defending champions Armagh and Donegal takes on place on Sunday (May 22) at 3.45pm at Clones.