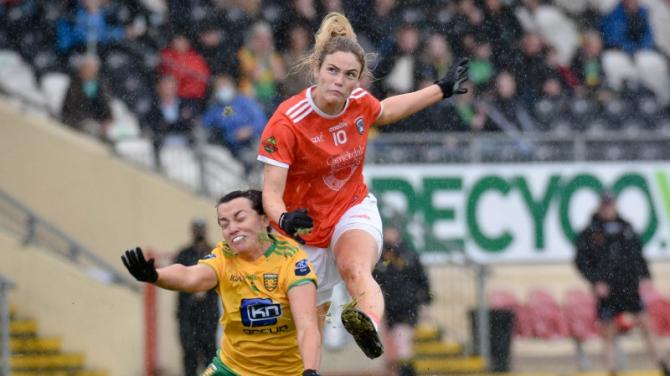 KATIE Taylor's fight against Amanda Serrando will be long regarded as one of best and biggest female boxing contests, writes Steve Malone.

It was probably the best fight of any in the ring in recent years and Taylor has helped propelled female boxing to a new level. Ladies Gaelic Football is also enjoying a bigger audience and Armagh goalkeeper Anna Carr expects Sunday's Ulster Final to be a proper ding-dong.

The Carrickcruppen star feels that her team owe a big performance to the supporters who left Croke Park disappointed after the league final defeat to Kerry. Carr also wants to pick up her fourth Ulster medal.

“We really value the Ulster competition and I think all the counties do and that is why Ulster is so intense competition to get out of and while it sets you up for the All-Ireland there is a lot of pride in winning in the Ulster title,” Carr said.

“There has been great rivalries over the years between us and Monaghan and us and Donegal, so I am sure it will be a pretty intense game and there will be plenty on the line anyway. We don’t want to give up our title lightly and I don’t think they like the fact that we have won two in a row, so they will be coming out to fight for it back.

“I think we owe it to the supporters that came to Croke Park because we made too many mistakes that day and we didn’t put on the show that we wanted to put on for them. But so will Donegal, they had a lot of support in Croke Park too and they didn’t win, so I think there will be a show put on and I would say it would be a borderline game throughout and think it could be one of the greatest games of ladies football this year.

“Both teams have a mindset of righting wrongs because we both didn’t get what wanted on our last big day out, I would say both of us will be butting heads anyway.”

Armagh ironed out some of their issues with an emphatic Ulster semi-final win against a disappointing Monaghan but the Orchard goalkeeper has Donegal firmly in her sights.

“A bit of frustration came in from the League final, we have been working on the mistakes we made then to make sure they don’t happen again,” said Carr.

“Against Monaghan we were a hurt team, so we were going out to win and we still have things to improve on but it helped in righting the wrong of the league final. We are striving for bigger and better results and bigger and better performances individually for the next game.

“Hopefully they all add up and it is always nice to have an Ulster trophy and we would love to take it back to McKeever Park.”